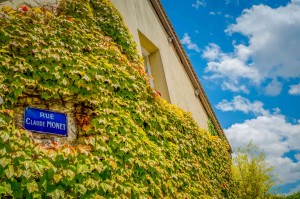 On Monday, November 14 we’ll celebrate Claude Monet’s 176th birthday. The founder of French impressionist painting, Monet was born in 1840 on the fifth floor of rue Laffitte, in the ninth arrondissement of Paris. When Monet was 5 years old, the family moved to the Normandy coast, where his father took over the management of the grocery business. It was during his childhood that he spent long days along the beaches and fell in love with the sea.

At 15, Monet sold pencil sketches of ships and boats to the locals for 10 to 20 francs. His aunt, Marie-Jeanne Lecadre, was an amateur painter and at her suggestion, Claude went to study drawing with a local artist. It was in 1856 that he met fellow artist Eugene Boudin who became his mentor and taught him to use oil paints.

At the age of 21, Monet was drafted into the First Regiment of African Light Cavalry in Algeria for a seven-year period of military service.  In a Le Temps interview of 1900, he commented that the light and vivid colors of North Africa “contained the germ of my future researches”.  After about a year of service, he briefly contracted typhoid fever and went absent without leave. His aunt intervened to get him out of the army if he agreed to complete a course at an art school.

He returned to Paris once more to become a student of Charles Gleyre where he learned to paint to effects of light with broken color and rapid brushstrokes – this later became known as Impressionism.

The name of the style derives from Monet’s famous depiction of a shipyard at sunrise entitled, Impression, Soleil Levent (Impression, Sunrise). The term “Impressionism” was originally a satirical word applied to the art form published by a critic in the Parisian newspaper. The movement faced harsh opposition from the conventional art community in France. The early impressionists were looked down upon because they were thought to be violating the rules of academic painting.

Here you’ll find the largest Monet collection in the world, from Impression, Sunrise to Giverny’s Water Lilies. This collection, presented in a room specially built for this purpose, gives the public the unique opportunity to admire all the significant stages of the master painter’s career and follow the evolution of his technique: from his youth caricatures of Le Havre’s personalities or Parisian critics, to the paintings inspired by his Giverny garden.

Experience an exhilarating French adventure on the Cosmopolitan,Explorer, and Continental tours. It’s never too late to get a taste of a multitude of exciting cultures!

Categories: AESU World Travel | Tags: AESU World Travel, claude monet, france, impressionism, and travel
This entry was posted on Wednesday, November 9th, 2016 at 1:45 pm . You can follow any responses to this entry through the RSS 2.0 feed. Both comments and pings are currently closed.