French culture is commonly thought of as artistic, bold, innovative, and expressive. So where did that idea come from? As it turns out, 19th century French authors played a huge role in the way we view French culture today. Through poems, novels, and plays, 19th century France was a post-revolution era of literary expression. Many of the creations of this time will be familiar to you, such as Les Fleurs du mal (The Flowers of Evil) and Les Misérables.

Let’s take a journey back to 19th century France, and learn about some of the famous French authors who helped craft the way we think of France today. 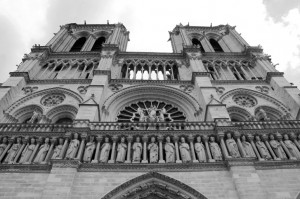 Victor Hugo, one of many influential French authors, wrote “The Hunchback of Notre-Dame”

Born in Paris, France, Victor Hugo wrote poems, novels, and drama. He is considered one of the most important French authors in the Romantic era (approximately 1800-1850), and one of his most famous pieces, Les Misérables, is said to be inspired by his younger, less-fortunate years. Although he originally studied law, by 1816 he began writing verses and found his passions and ambitions for literature. He made a group of friends interested in Romanticism, and met with them regularly at the Bibliothèque de L’Arsenal in Paris.

Hugo’s first novel was published in 1823, titled Han d’Islande (Hans of Iceland). Several collections of prose followed, such as Nouvelles Odes (1824) and Odes et ballades (1826). His first verse drama, and his first emergence as a true Romatic, was Cromwell, published in 1827. Although his early works are not well known, they are still wonderful reads. Hugo is mainly known today for his novels, Notre-Dame de Paris (The Hunchback of Notre-Dame, 1831), and Les Miserables (1862).

Charles Baudelaire is mainly known for his poems and criticism. Also born in Paris, Baudelaire was educated at the prestigious Lycée Louis-le-Grand secondary school, and began writing his earliest poems as a student there. Interestingly, he also became a student of law as Hugo did, before realizing his talents in literature. He received his inheritance in 1842, blowing it on clothes, expensive foods and wines, and opium, which he first experienced with in Hôtel Pimodan (now the Hôtel Lauzun) in Paris.

Baudelaire wrote the poems for Les Fleur du mal (1857) in 1842-1846. He also translated and wrote an adaptation for Thomas de Quincey’s Confessions of an English Opium Eater, and wrote many critical essays on other French authors, such as Gustave Flaubert, Théophile Gautier, and more.

A realist and novelist, Gustave Flaubert was a critic of the bourgeois, and even stood trial for one of his novels. Born in Rouen, France, he was sharply intelligent and studied law, like our other two French authors, at the Faculty of Law in Paris. However, he had to drop out of his studies due to being diagnosed with what we now recognize as epilepsy. After his father and sister’s death in 1846 and 1847 respectively, he spent the rest of his life at his Croisset estate near Rouen with his mother and niece.

His most famous work was Madame Bovary (1857), the novel he stood trial for due to its alleged immorality. He escaped conviction by arguing the novel’s ending served as punishment for the immoral acts in the story. Other works include L’Éducation sentimentale (1843–45) and La Tentation de Saint Antoine (1874).

AESU offers several trips to Paris, France, including: Cosmopolitan, Explorer, Euro Focus, Great Escape, and Euro Spree. All our tours in England have the chance to go to Paris to see where French Romanticism history was made.

If you have any questions or want help booking your Paris, France adventure, please contact AESU by calling 800-638-7640, or fill out the contact form found on our website.

Categories: Blog and France | Tags: france, french authors, and paris
This entry was posted on Thursday, November 12th, 2015 at 3:51 pm . You can follow any responses to this entry through the RSS 2.0 feed. Both comments and pings are currently closed.