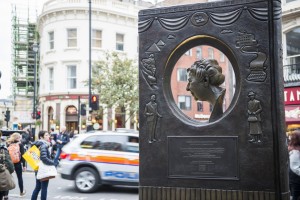 During the month of October, follow our blog for more spooky topics to celebrate Halloween!

“Oh, yes. I’ve no doubt in my own mind that we have been invited here by a madman-probably a dangerous homicidal lunatic.”

And Then There Were None is widely considered Agatha Christie’s masterpiece. The quote above occurs when the 10 strangers invited to a remote island discover that their enigmatic host intends to murder each one of them over the course of their stay. Since its publication in 1939, the novel has sold more than 100 million copies, making it the world’s best-selling mystery of all time.

Dame Agatha Mary Clarissa Christie was born on September 15, 1890, in Devon. She was the youngest of three children and described her childhood as “very happy” growing up in rural England and vacationing in Southern Europe.

Christie wrote her first short story while recovering in bed from illness. It was entitled the House of Beauty and detailed her experience with madness and dreams. She began to write more and submit to magazines under pseudonyms but was unable to see any publishing success. Her stories illustrated her interest in spiritualism and the paranormal. She continued to write and continued to be rejected by numerous publishers.

Christie’s first published book, the Mysterious Affair at Styles, introduced the character Hercule Poirot, who later continued to appear in 22 novels and 54 short stories. Christie’s character, Miss Marple, was introduced in 1927 and appeared in 12 novels.

She gained a reputation as the “Queen of Crime” for structuring what is now known as the classic mystery novel: a murder is committed, there are multiple suspects, and a detective slowly but surely uncovers the answer during a gradual unveiling of twists and secrets.

Murder on the Orient Express was published by Collins Crime Club in 1934. Hercule Poirot is in route to London on the Orient Express, when he must solve a murder that occurred in his car the evening before. The novel has been adapted into film several times, and just recently, it was announced that it would be adapted yet again to be released in 2017. The adaptation was inspired by a 2010 installment of ITV’s Poirot series, starring David Suchet as the famous detective.

Christie’s stories have been adapted to film, television, and radio. By the end of her life, she had written 78 novels, 19 plays, and over 100 short stories. While crime and mystery were her main focus, she also published 6 romance novels under the name of Mary Westmacott. In 1971, she was honored with the order of Dame Commander of the British Empire.

You can visit her home on the River Dart in Devon, England.

Categories: Blog | Tags: aesu, AESU World Travel, agatha christie, and London
This entry was posted on Wednesday, October 5th, 2016 at 11:55 am . You can follow any responses to this entry through the RSS 2.0 feed. Both comments and pings are currently closed.