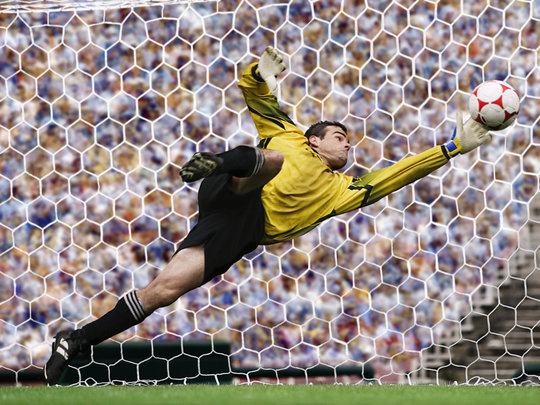 The first Champion Clubs’ Cup match was held in 1955 between Sporting Clube de Portugal and FK Partizan, resulting in a 3-3 draw. Real Madrid CF would go on to win the first five championships.

You may call it soccer, but in most of the world the sport goes by a different name – football. And the pinnacle of the soccer – sorry, football – world is the Union of European Football Associations (UEFA) Champions League, which was founded in 1955.

How the UEFA Champions League Came to Be

The UEFA, which was founded in June 1954, was not actually the brains behind the Champions League. That distinction goes to L’Equipe editor Gabriel Hanot and his colleague Jacques Ferran, who were pushing for a Europe-wide club competition while most UEFA members were more interested in a national team competition. Hanot and Ferran drafted the initial plans for a football league to be played on Wednesday nights under floodlights.

On the 2nd and 3rd of April 1955, representatives from 16 clubs met and unanimously approved a set of rules. However, FIFA, the world governing body of the sport, would not authorize the new club competition unless it was organized by the UEFA, who agreed to the terms.

The first Champion Clubs’ Cup match was held in 1955 between Sporting Clube de Portugal and FK Partizan, resulting in a 3-3 draw. Real Madrid CF would go on to win the first five championships.

The Champions League, as we know it today, however, did not come about until 1992 when a round-robin group stage was added to the traditional knockout elements and the field was expanded to 32 teams.

Today, the Champions League is one of the most prestigious tournaments in not just Europe, but the world, spanning territories in Africa, Asia, Latin America, North America, the Middle East, Oceania and beyond. The Champions League final, in recent years, has been the most-watched annual sporting event worldwide. The 2013 final alone drew more than 360 million viewers.

Here in the States, Champions League action can be watched on Fox Sports.

Do You Have Football Fever?

If all of this Champions League talk has you dreaming sweet dreams of Europe, then AESU is here for you. For over 38 years, AESU has been the most trusted name in travel. We offer unique, exciting travel programs for college students and young professionals at affordable rates, including several trips to Europe.

Each trip is action-packed and informal – designed for people your own age. We are also able to design custom tours just for your group.

If you have any questions or want help booking your next adventure, please contact AESU by calling 800-638-7640 or fill out the contact form found on our website.

Categories: Blog and Europe | Tags: Champions League, European Football, and UEFA
This entry was posted on Friday, August 21st, 2015 at 11:59 am . You can follow any responses to this entry through the RSS 2.0 feed. Both comments and pings are currently closed.