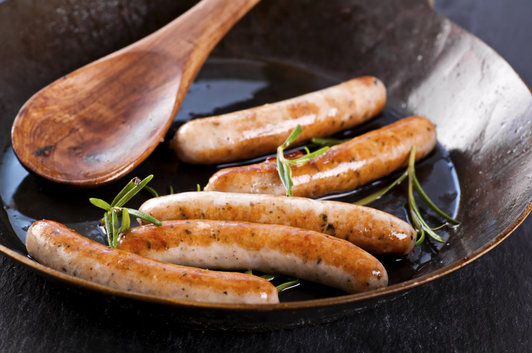 Traditional German food is rich, tasty, and, most importantly, delicious.

Germany’s rich food is influenced by its rich history. For hundreds of years, the German Empire consisted of hundreds of small kingdoms, free cities, duchies, etc. And while Germany is very united today, each region remains proud of its heritage, traditions, and customs, which include food. For instance, Weisswurst is a popular dish originating in Bavarian, Currywurst was invented in Berlin, Black Forest Cake comes from Baden-Württemberg, Rheinischer Sauerbraten originated in North Rhine-Westphalia and Rhineland-Palatinate, Königsberger Klopse was made famous in Germany’s northern states, and so forth. And almost every region has their own special kind of wurst (sausage).

A Meal Fit for an Emporer, a King, and a Beggar?

However, nowadays many of these traditions are put on hold during the week when there is simply no time to eat a big breakfast before work or a hot lunch in the middle of the day. The weekends are quite a different story.

“Wouldn’t want to miss this, no regrets.” – Sean S

Want help booking your trip to beautiful – and delicious – Germany? Please contact AESU by calling 800-638-7640 or fill out the contact form found on our website. And don’t forget to check out all of our great Travel Tips, especially the Travel Tips for Europe, before you head overseas.

Categories: Blog and Germany | Tags: German Food and Traditional
This entry was posted on Thursday, May 21st, 2015 at 3:09 pm . You can follow any responses to this entry through the RSS 2.0 feed. Both comments and pings are currently closed.