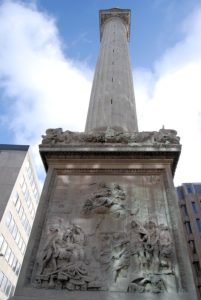 The monument to the Great Fire of London.

When people think of major capital cities of the world that are steeped in culture and history, often London comes to mind. But many people don’t know that this city was almost wiped out centuries ago in what is known to locals as the Great Fire of London. There are several facts and stories around this devastating event, and how it shaped the London we know today.

The Great Fire of London took place early September 2nd of 1666, and, over the course of five days, it engulfed nearly the entire city. It was infamously sparked on Pudding Lane by an oven from the king’s baker, Thomas Farrinor, which had not been properly extinguished for the night. The surrounding area had many warehouse buildings filled with highly flammable materials like wood, rope, oil, and pitch that all fed the fire. That, combined with a strong Easterly wind, caused the fire to spread throughout London. At the time, there was no formal fire brigade. The citizens themselves tried to put out the fire with buckets of water mostly. Eventually, soldiers were forced to use gunpowder explosives to cut off the path of the fire.

The Great Fire of London destroyed over 13,000 houses and buildings, including 90 churches, like St. Paul’s Cathedral, and many historic buildings. Surprisingly, there were only about a dozen recorded deaths from the fire, but some recent historians believe that the death toll was likely much higher. However, nearly hundreds of thousands were made homeless, and it took almost 50 years to rebuild the city fully. As disastrous as the damage was, King Charles II embraced the rebuilding process as an opportunity to improve London. He commissioned architect Sir Christopher Wren to redesign St. Paul’s Cathedral as well as other major parts of London. Streets were widened, as well as new ones added, and the new houses were faced with brick to prevent such a fire from happening again.

Many Londoners of the time credited the rebuilding to making London one of the cleanest capitals in the world, which possibly ended the plague of 1665. From the terrible event of the Great Fire of London came the birth of an organized fire brigade and insurance agency. London owes its long-time grandeur to the reconstructed brick and stone buildings that you can still see today.

Categories: England | Tags: england, London, Travel London, and Visit London
This entry was posted on Wednesday, November 20th, 2019 at 11:00 am . You can follow any responses to this entry through the RSS 2.0 feed. Both comments and pings are currently closed.