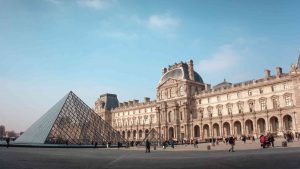 Visit the Louvre with AESU!

Some of the world’s oldest, most notable artworks are displayed throughout Europe’s famous museums. Mona Lisa lives in the Louvre, Venus resides in the Uffizi Gallery, The Creation of Adam shimmers at the highest point of the Sistine Chapel, and the Girl with a Pearl Earring stares into the abyss of the Mauritshuis. Whether your trip takes you to one European city or five, you’re bound to find an exquisite museum to spend your time. Discover four of our favorites!

Amsterdam is home to several beautiful museums, and three of the most popular are conveniently located at the Museumplein (Museum Square). The Van Gogh Museum is home to the world’s largest collection of works by the Dutch artist and considered a must-see attraction for tourists. With 200 paintings, 400 drawings, and 700 hand-written letters, visitors can easily spend the entire day inside the Van Gogh Museum.

Over eight million people visited the Louvre in 2017. It isn’t just the world’s largest art museum, but it’s also considered a historical monument in Paris, France. Snap a photograph in front of the famous pyramid, then spend a few hours perusing an extensive collection with artworks dating back some 7000 years before our time.

Home to the Rosetta Stone and several Parthenon sculptures, the British Museum in London is a historical delight to the senses. Visitors can view works from all over the world, from Japanese Samurai armor to Oxus treasure from the Achaemenid Persian period. While the museum continues to lend and borrow artworks, it’s permanent collection numbers over eight million pieces.

If you’d prefer to spend your day perusing contemporary works, the Boros Collection in the Berlin Bunker is for you. Originally built by Nazi Germany to shelter up to 3,000 Reichsbahn train passengers, the Bunker has since been used as a storage unit for tropical fruit and a hardcore techno dance club. Now, the Bunker (Reichsbahnbunker) is home to the private collection of Christian Boros. The collection is comprised of works by international artists dating from 1990 to present day.

Categories: Europe | Tags: European Museums, The Louvre, and Van Gogh Museum
This entry was posted on Wednesday, June 20th, 2018 at 9:52 am . You can follow any responses to this entry through the RSS 2.0 feed. Both comments and pings are currently closed.