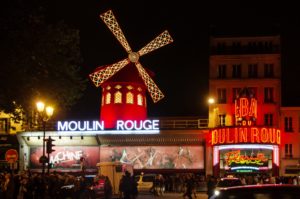 The Moulin Rouge has been a mainstay of Parisian culture since its founding in 1889.

Paris has long been one of the most popular travel destinations in the world for its beauty, history, food, and attractions. From the Louvre to the Eiffel Tower and more, Paris offers something for everyone! The Moulin Rouge cabaret is another famed landmark that travelers seek out. Located in the Pigalle neighborhood in the 18th arrondissement, the Moulin Rouge is more than just the location of the famous Baz Luhrmann film. It is a French cultural institution that has survived a fire and two world wars and seen many famous artists and dancers pass through its doors since its founding during La Belle Époque.

The Moulin Rouge and its iconic red windmill was opened on October 6, 1889 by Joseph Oller and his manager, Charles Zidler. Its location near Montmartre, a bohemian neighborhood filled with artists such as Henri de Toulouse-Lautrec, influenced the shows that the cabaret put on and its popularity was cemented early on through the posters that these artists created to advertise the venue. The dance for which the Moulin Rouge is most known for, the French can-can, was also invented during these early years. By 1902, the extravagant performances of can-can dancers fell out of favor with the French public and the venue was converted into a concert theatre dedicated to operetta. A fire destroyed the original building during the first World War in 1915, but the Moulin Rouge was rebuilt and reopened after the war in 1921.

The outbreak of World War II and the German occupation were dark times for the Moulin Rouge, by this point rededicated to cabaret shows. The venue was used by German occupying troops for entertainment – in fact, many autobiographies of German officers during this time mention visits to the Moulin Rouge and the impression it made on them. One bright spot during this period was the breakout of French singer Edith Piaf, who became a bona fide star and even performed on the stage just a few days before the liberation of Paris in 1944.

After the war, the Moulin Rouge began to transform into the international tourist destination that we recognize today. The main catalyst for this occurred in 1959 with the installation of new kitchens, thus giving birth to the famed dinner shows that go on even today. The year 1962 also brought forth major changes – Jacki Clérico, son of then-owner Joseph Clérico, took over management of the venue and proceeded to transform the space, installing a gigantic aquarium and putting on aquatic ballets. Jacki also began naming his revues with titles that only start with the letter “F” – this tradition, born out of Jacki’s superstition, continues to this day.

Today, the Moulin Rouge is famed throughout the world as a symbol of the Parisian attitude towards life, beauty, and love. Discover it for yourself on your next trip to the City of Light!

Looking to travel in 2020? Experience an exhilarating adventure on the Egypt Valley of Kings tour, Greek Island Odyssey tour, the Iceland Airwaves tours, and more!

Categories: France | Tags: france, Moulin Rouge, and paris
This entry was posted on Wednesday, August 12th, 2020 at 10:43 am . You can follow any responses to this entry through the RSS 2.0 feed. Both comments and pings are currently closed.