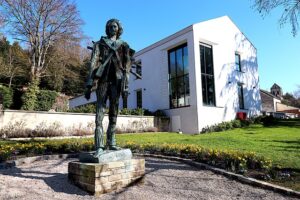 Countless artists have paid tribute to the life and work of Vincent van Gogh in the form of sculptures, movies, and paintings. This sculpture by Ossip Zadkine stands in Auvers-sur-Oise, the French commune where van Gogh took his own life.

Born on March 30th, 1853, Vincent van Gogh is one of the most well-known artists in the entire world. Known for his self-portraits and his use of color as the chief mode of expression in his paintings, van Gogh’s tragically short life was turbulent and marked by periods of psychotic episodes and famed incidents such as his confrontation with Paul Gauguin that led to him cutting off part of his own ear. Despite not being recognized in his own time, van Gogh’s posthumous fame has led to his works featuring among the most expensive paintings ever sold, as well as a museum in his honor in his native Holland.

Van Gogh was born in Groot-Zundert, Holland and was the son of a pastor. He was raised in a very religious atmosphere, but the young Vincent struggled mightily with his emotions and lacked self-confidence. He was never really sure what he wanted to do with his life and ended up bouncing between jobs through his twenties. By 1880, van Gogh had already experienced 2 failed marriages, failed the University of Amsterdam’s entrance exam, failed a missionary school, and was dismissed as a preacher in Belgium for being too overzealous. However, his brother Theo suggested that he take up art after seeing some of his drawings of the people and scenes around him in Belgium and he ended up enrolling at the Académie Royale des Beaux-Arts in Brussels in November 1880.

Van Gogh’s early works are somber in tone and sharply lit, but very much of their time. The most famous of his early works is The Potato Eaters, which was commissioned by dealer in Paris in 1885 and features depictions of peasants. Also in this year, van Gogh went to Antwerp where he ended up purchasing many Japanese wood block paintings (known as ukiyo-e) – this ended up having a major influence on the impressionist movement as a whole and would further serve to help van Gogh evolve his style.

He moved to Paris in 1886 and met most of the major impressionist painters on the scene at the time such as Picasso, Monet, and Gauguin. He was never able to successfully reproduce the impressionist style completely, but ended up with a style all his own that combined intense brush strokes, color, surface tension, and movement.

After the famed ear-cutting incident, which occurred during Gauguin’s visit to his artist’s house in Arles in 1888, van Gogh seems to have suffered through a severe bout of mental illness which culminated in a trip to the asylum for treatment. He seemed to be doing better during the year of 1889, which saw him create his most famous work, Starry Night – but he ended up relapsing in 1890 and ended up committing suicide on July 27, 1890 at the age of 37.

Despite his lack of success during his lifetime, van Gogh’s work has had a profound impact on art since his time and is known as one of the artists foundational to the development of modern art in the 20th century!

Categories: Holland | Tags: amsterdam, Art, artist spotlight, france, holland, Van Gogh Museum, and Vincent van Gogh
This entry was posted on Wednesday, March 31st, 2021 at 11:00 am . You can follow any responses to this entry through the RSS 2.0 feed. Both comments and pings are currently closed.