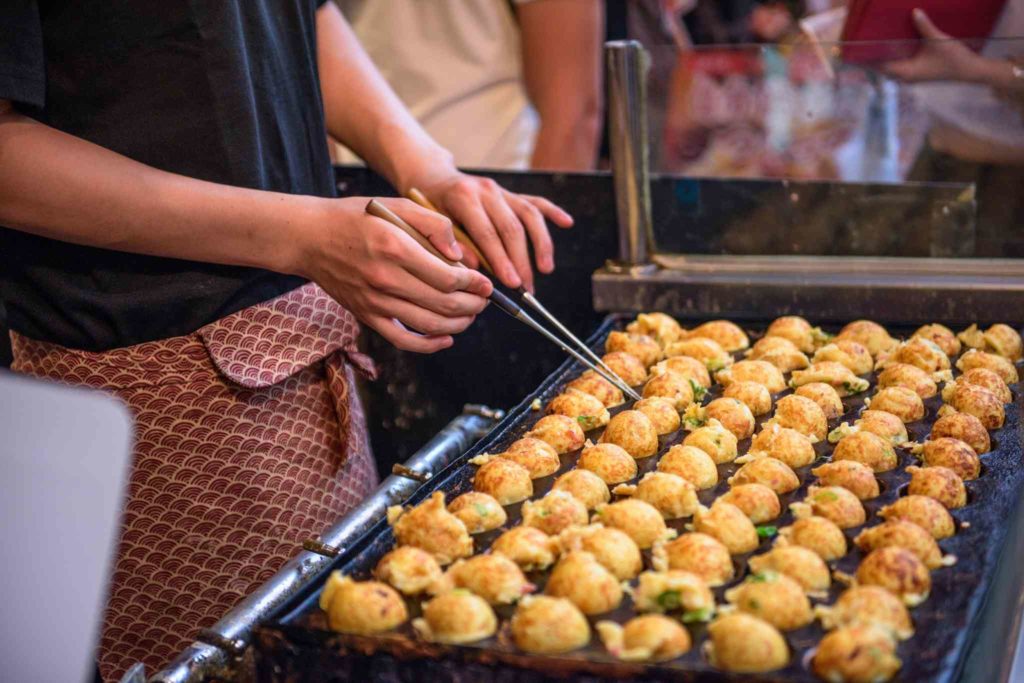 Takoyaki, or fried octopus, is a beloved snack in Osaka with stands almost everywhere in the city!

Osaka breaks the stereotypical image most foreigners have of Japan and its culture. It may only be a 2.5 hour ride from Tokyo via shinkansen and less than an hour from the historic shrines and temples of old capital Kyoto, but Osaka is known for being a universe away from both more well-known destinations. Osakans exude warmth and playfulness that is rarely seen in staid Tokyo while also featuring futuristic neon-drenched neighborhoods like Dontonbori that you wouldn’t find in the old-school charm of Kyoto. Osaka is also known, both to foreigners as well as native Japanese, as a foodie haven. There’s even a local expression “Osaka no kuidaore” – taken literally it means eating the Osakan way, until you fall into debt! So as you wander the streets of Umeda, Shinsekai, Dontonbori, and the other famed neighborhoods of Osaka, take the opportunity to experience the city through the smells and tastes of its food!

Takoyaki is a simple snack beloved by locals and throughout Japan. It consists of a fried dumpling filled with octopus, ginger, green onions, and more. This tasty treat is then covered with a sweet brown sauce before being topped with mayonnaise, powdered nori seaweed, and bonito flakes. Street stalls selling takoyaki are omnipresent throughout Osaka, but if you’re a true fanatic check out the Konamon Museum in Dontonbori, easily recognized by the large octopus out front!

Another popular Kansai delicacy, okonomiyaki is a savory pancake. The most basic form of this dish consists of eggs, flour, shredded cabbage, and grated yam. But the rest of the toppings are really up to you! After grilling the pancake, the dish is topped with a special savory sauce. Okonomiyaki restaurants are everywhere – but check out one of the locals’ favorites, Mizuno, also located in Dontonbori and usually with a line at prime hours!

If you like to live dangerously, fugu might be of interest to you during your stay in Osaka. Fugu, or blowfish, is famed for being extremely poisonous if prepared by someone who doesn’t know what they’re doing. Fortunately, all fugu chefs in Japan are required to train for at least three years before qualifying for a license to prepare and serve this dish, and nowadays only those foolish enough to try and prepare the dish on their own without training end up dying from consuming it. Fugu is usually served raw in a sashimi style, but can also be a part of a shabu-shabu hotpot meal, fried in tempura, or deep-fried like Japanese-style fried chicken (karaage).

A trip to Japan wouldn’t be complete without several bowls of ramen! You’ll quickly learn the sheer volume and variety of regional styles available as well as how each stand tries to stand out with its own unique take on the dish. Osaka has ramen stands serving every type of ramen imaginable, from the rich, milky Hakata style to the miso-broth of Sapporo style. However, try to look out for a stand serving the local variety – Wakayama style is native to the Kansai region and features a darker broth made from soy sauce and pork bones.

Categories: Japan | Tags: Asia, food travel, Japan, and Osaka
This entry was posted on Wednesday, January 20th, 2021 at 10:30 am . You can follow any responses to this entry through the RSS 2.0 feed. Both comments and pings are currently closed.