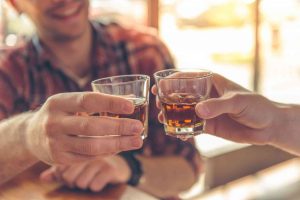 May the road rise to meet you!

The origins of Irish whiskey are as clear as one’s head after enjoying several glasses of the golden, spicy spirit. It’s commonly believed that around 1000 A.D., Irish monks returned from their travels through the Mediterranean with a secret to distilling perfumes. In the classic Irish fashion, this method was quickly modified to produce a drinkable spirit and whiskey was born in all of its amber glory.

The earliest written mention of the spirit dates back to 1405, where it was written that the leader of an Irish clan died after taking an excessive amount “of aqua vitae”. The word itself is derived from a Gaelic phrase, “uisce beatha” which means “water of life”

As the distillation of whiskey became increasingly more popular in Ireland, the English Parliament passed an Act that made it illegal for Irish citizens to create whiskey without a license granted by the Crown. From this legality, the Old Bushmills Distillery was born, and it claims to be the oldest surviving licensed distillery in the world with the current company registered to trade in 1784.

By the early 1800s, Ireland was the largest spirit market in the United Kingdom. As demand continued to increase, and as capacities expanded, Dublin was home to five off the largest licensed distilleries in the country, and some would go on to become the largest in the world.

John Jameson, William Jameson, John Powers, and George Roe were the largest family run distilleries also known as the “Big Four”. They dominated the whiskey playing field while producing “pure pot still” whiskey. This recipe was made from a mix of malted and unmalted barley and solely distilled in pot stills.

Tour an Irish Distillery With AESU

Prepare to open your mind and explore your taste buds while traveling along the southern coast of Ireland from Dingle to Dublin.

If you have any questions or want help booking your Ireland adventure, please contact AESU by calling 800-638-7640, or fill out the contact form found on our website.

Categories: AESU World Travel | Tags: aesu, Irish Whiskey, and Travel Blog
This entry was posted on Wednesday, April 19th, 2017 at 12:25 pm . You can follow any responses to this entry through the RSS 2.0 feed. Both comments and pings are currently closed.