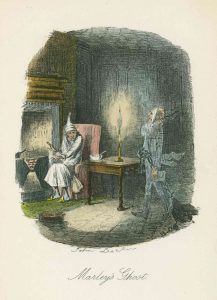 “Man of the worldly mind!” replied the Ghost, “do you believe in me or not?”

A Christmas Carol, published on December 19, 1843, preserved the Christmas customs of old England, fixed the image of the holiday season as one of wind and snow, and presents the idea that the spirit of the holiday cannot be trumped by consumerism. More than 100 years later, London’s Sunday Telegraph published a piece on the beloved story, in which the author, Charles Dickens, was named “The Man Who Invented Christmas.”

The Making Of A Storyteller

Dickens was born on February 7, 1812, in Portsmouth, England. The second of eight children and the son of a Navy clerk, the family moved often to where his father could find work. During his school years, Dickens worked 10-hour days at Warren’s Blacking Warehouse, where he earned six shillings a week pasting labels on pots and boot blacking.  The harsh working conditions made a lasting impression and later influenced his interest in themes socio-economic and labor conditions that occur in many of his essays and works of fiction.

Charles Dickens began writing A Christmas Carol in October of 1843 and it was finished by November of that same year. John Forster wrote in The Life of Charles Dickens, of Dickens attitude towards writing his beloved story. “He wept over it, and laughed, and wept again, and excited himself to an extraordinary degree’…He walked thinking of it fifteen and twenty miles about the black streets of London, often at very late hours of the night. He kept Christmas that year with an extraordinary zest; ‘such dinings, such dancings, such conjurings, such blind-man’s buffings, such theatre-goings, such kissing-out of old years and kissing-in of new ones, never took place in these parts before.”

That same mentality is echoed through the themes of the very story itself. A literal Christmas “Scrooge” is swept away by the spirit of the holiday and transformed into a generous, merry man. He showers the citizen of London with Christmas joy as he runs through the cobblestone streets, shouting good tidings.

Categories: AESU World Travel | Tags: AESU World Travel, charles dickens, and London
This entry was posted on Thursday, December 8th, 2016 at 3:59 pm . You can follow any responses to this entry through the RSS 2.0 feed. Both comments and pings are currently closed.