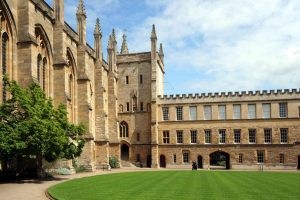 All aboard the Hogwarts Express! Take a train ride through the English countryside, sip a frothy mug of butterbeer in Hogsmeade and discover your wizardry destiny at Ollivander’s Wand Shop in Diagon Alley. Duck from a dementor’s kiss and try your hand at Dumbledore’s defensive spells! Reducto! Stupefy! Expecto Patronum!

The U.K, and especially London, is full of magical spots featured in the books and films and you can relive the charm of Harry Potter when you explore England with AESU. Stand in the same place where Harry learns to fly his first broom (Alnwick Castle) and explore the battlegrounds of the Tri-Wizard Tournament (the Scottish Highlands). Whether you be muggle or wizard, everyone can discover the wonder of Britain’s most magical Harry Potter sites!

The Cloister of Gloucester Cathedral, finished in 1412, is famous for its brilliant fan vaulting, the earliest example of the form in England. It was originally built to house the resident Benedictine monks and incorporates 20 small and neatly hidden niches that would have contained their desks. In Harry Potter and the Sorcerer’s Stone, Harry and Ron hide from a troll in the cloisters of the great Cathedral.

The school lent its Fourth Form Room, which dates back to 1615, to serve as the classroom where Charms instructor Professor Flitwick teaches Hermione how to levitate a feather in the first film.

The college’s grand stone staircase dates back to the 16th century, and it’s here that Harry encounters Filch, Dumbledore, and Tom Riddle in Harry Potter and the Chamber of Secrets. Christ Church is open to the public but you may encounter young academics running to and from class!

This small, picturesque train station in remote North Moors Yorkshire National Park is home to Hogsmeade station in Harry Potter and the Sorcerer’s Stone. The village of Goathland is a short walk from the magical station.

This fortress-like castle dates back to the 12th century and serves as the second-largest inhabited castle in England. It provides several interior and exterior locations for Hogwarts in most of the movies, and most notably the grounds where Harry first learns how to fly. You can recreate this scene during a free summer “broomstick training” lesson!

AESU offers several trips to London and the UK, including Cosmopolitan, Euro Spree, Explorer, Euro Focus, and our most popular tour, Great Escape. Explore England and its rich history and culture. Stroll down London, the muggle capital of the world – be sure to watch out for the Knight Bus!

Categories: Blog | Tags: Harry Potter, London, and Visitlondon
This entry was posted on Wednesday, December 14th, 2016 at 1:49 pm . You can follow any responses to this entry through the RSS 2.0 feed. Both comments and pings are currently closed.