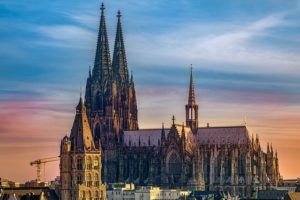 Read on to learn more about the interesting history of Cologne Cathedral.

The largest city in western Germany, Cologne, is home to the most visited landmark in Germany, the Cologne Cathedral. The Cologne Cathedral is famous for holding the shrine of The Three Wise Men, a holy relic brought by Archbishop Rainald von Dassel back in the mid-12th century. What becomes a famous destination for Catholic and Christian pilgrimage is a respected monument of Gothic architecture, featuring the second-tallest spires in Northern Europe. Read on to learn more about the interesting history of Cologne Cathedral.

Categories: AESU World Travel | Tags: europe and world travel
This entry was posted on Wednesday, April 1st, 2020 at 11:00 am . You can follow any responses to this entry through the RSS 2.0 feed. Both comments and pings are currently closed.