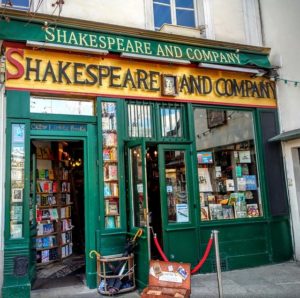 The original founder of Shakespeare and Company was a woman named Sylvia Beach. She first opened the bookstore in 1919 at 12 rue de l’Odéon in Paris. The store was also a lending library, and it quickly became a place that featured not only the works of famous authors but it also became a favorite home for great authors of the time such as Ernest Hemingway, F. Scott Fitzgerald and many French authors like André Gide and Jules Romains. Beach also featured many important female writers such as Gertrude Stein, Janet Flanner, and more. She was known for her welcoming nature and openness to all literature, and she published James Joyce’s daring Ulysses when other publishers declined. Beach’s bookstore closed in 1941 with the German occupation of France. After being threatened by Nazis, Beach managed to hide her collection before she was forced to spend six months in an internment camp. Beach survived to write her memoir but never reopened the bookstore.

George Whitman opened a bookstore called Le Mistral in 1951 at 37 Rue de la Bûcherie, the current Paris location. In 1964, he renamed the store Shakespeare and Company both in honor of Sylvia Beach and to commemorate the 400th anniversary of Shakespeare’s birthday. Whitman continued in the spirit of Beach’s original store as a place to celebrate all literature as well as a favorite spot for notable writers from around the world.

Categories: France | Tags: AESU Europe, AESU World Travel, europe, france, paris, and world travel
This entry was posted on Wednesday, March 25th, 2020 at 10:45 am . You can follow any responses to this entry through the RSS 2.0 feed. Both comments and pings are currently closed.