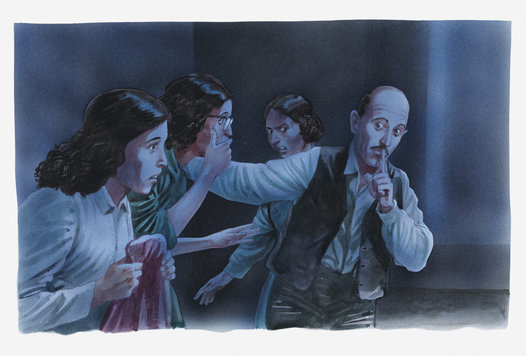 When Adolf Hitler became chancellor of Germany on 30 January 1933, Otto Frank, Anne Frank’s father, packed up his family and fled the country.

Anne Frank: you probably know the name. The youngest daughter of a Jewish couple living in Frankfurt, Germany during World War II, Anne Frank is best known for that diary of hers. And if you have ever read Anne Frank: The Diary of a Young Girl, you know just how amazing her short life was and how her experiences continue to affect the lives of a new crop of young readers year after year. If you have never read Anne Frank’s diary, we highly recommend it. In the meantime, however, here is a brief history lesson on this important historical figure.

The Life and Death of Anne Frank

When Adolf Hitler became chancellor of Germany on 30 January 1933, Otto Frank, Anne’s father, packed up his family and fled the country.

Though this did hurt me deeply, I realized that Germany was not the world, and I left my country forever,” recalled Otto.

The Franks moved to Amsterdam, Netherlands, where they lived a normal, happy life up until 1 September 1939. This was when Nazi Germany invaded Poland, igniting what we now know to be World War II. Then on 10 May 1940, the conflict made its way to the Franks in the Netherlands. Soon after their invasion, the Nazis began implementing anti-Jewish measures, including requiring Jews to wear a yellow Star of David at all times and observe a strict curfew. Then, on 5 July 1942, Anne’s sister Margot was summoned to report to a Nazi work camp in Germany. The family went into hiding the next day. During the next two years, Anne, a young girl of 13, wrote about her experiences and wishes, recording every thought in her now famous diary.

On 4 August 1944, a German secret police officer accompanied by four Dutch Nazis stormed the Franks’ secret hideout and arrested everyone in there, including Otto’s business partner Hermann van Pels, his wife, Auguste, and their son, Peter. Anne was just 15 at the time and was sent to a prison camp where she eventually died. Anne and her sister were just two of more than 1 million Jewish children who died during the Holocaust.

In honor of Anne Frank’s story, the house where she and her family hid has been transformed into a museum that attracts millions of visitors per year. People who were captivated by Anne’s own words in her published diary are given the opportunity to see up close exactly where she lived, as well as to see other artifacts and exhibitions from the World War II period. Relive history along with them when you visit the Anne Frank House in Amsterdam on your AESU European tour!

“Some of the greatest experiences of my life!” – Callie P

If you have any questions or want help booking your next adventure, perhaps most importantly, affordable trip to Munich, Germany, please contact AESU by calling 800-638-7640 or fill out the contact form found on our website.

Categories: Blog and Europe | Tags: Anne Frank and Birthday
This entry was posted on Thursday, June 11th, 2015 at 4:53 pm . You can follow any responses to this entry through the RSS 2.0 feed. Both comments and pings are currently closed.