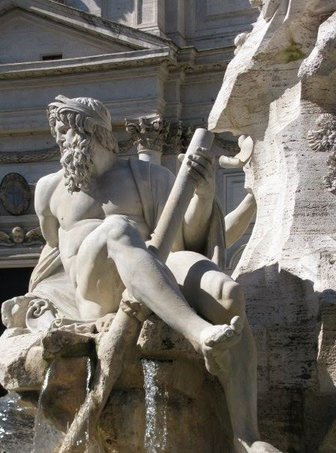 Among some of Gian Lorenzo Bernini’s most popular works are his Roman fountains, including Fontana dei Quattro Fiumi.

Gian Lorenzo Bernini (1598-1680) was a 17th century sculptor and architect who is credited with creating the Baroque style of sculpture.

What is the Baroque Style?

The term Baroque is most likely derived from the Italian word barocco or the Spanish word barrueco, which is used to describe an irregular or imperfect pearly. The Baroque style of sculpture, meanwhile, uses exaggerated motion and intricate details to appeal to the senses and evoke emotion. The style was greatly influenced by three cultural events:

Who is Gian Lorenzo Bernini?

Arguably the greatest sculptor of the 17th century, Gian Lorenzo Bernini worked primarily in Rome. During his illustrious career, Bernini received numerous commissions, many of which were associated with the papacy. Some of his most famous works include:

The Fontana dei Quattro Fiumi, in particular, is located in the Piazza Navona in Rome. Designed in 1651, the fountain was commissioned by Pope Innocent X.

L’Estasi di Santa Teresa (The Ecstasy of Saint Teresa) is a sculptural group designed and completed by Bernini in white marble. The sculptures, commissioned by Pope Innocent X in 1647, are an elevated aedicule (shrine) in the Cornaro Chapel, Santa Maria della Vittoria in Rome.

The Elephant and Obelisk

Elephant and Obelisk is a sculpture designed by Benini and unveiled in the Piazza della Minerva in Rome in 1667. The sculpture was commissioned by Pope Alexander VII, who decided he wanted an Egyptian-style obelisk in front of the church of Santa Maria sopra Minerva. The sculpture itself, while designed by Bernini, was actually executed by his student, Ercole Ferrata.

Visit the Works of Gian Lorenzo Bernini in Rome

If you have any questions or want help booking your next adventure, perhaps most importantly, affordable trip to Munich, Germany, please contact AESU by calling 800-638-7640 or fill out the contact form found on our website.

Categories: Blog and Italy | Tags: Gian Lorenzo Bernini and rome
This entry was posted on Thursday, June 18th, 2015 at 3:09 pm . You can follow any responses to this entry through the RSS 2.0 feed. Both comments and pings are currently closed.