Frankenstein Castle will forever be associated with the fictional and frightening Frankenstein’s monster. Author Mary Shelley guaranteed the castle’s notoriety when it inspired her but the castle was known for strangeness long before Frankenstein was published. The castle, located just outside of Darmstadt, Germany, was built in the 13th century and has been the location for several strange occurrences and natural phenomenon. 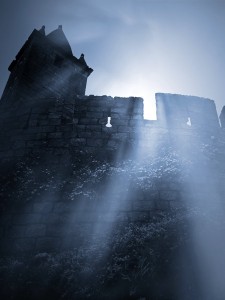 Mary Shelley’s “Frankenstein” is said to be inspired by this famous German castle.

Frankenstein Castle’s most famous inhabitant, Johann Conrad Dippel, was almost undoubtedly Mary Shelley’s inspiration for Victor Frankenstein. He was an alchemist who lived in the Frankenstein castle during the late 1600s. He was known for experimenting with corpses and dissecting animals. Dippel had strong opinions about religion and politics earned himself enemies throughout the field of alchemy and the upper class. Many rumors circulated around Dippel because of his experiments. The most popular rumor was that he could transfer the soul from one dead body to another. Dippel was also known for inventing the elixir of life. He told everyone that because of the elixir, he would live to 135. Instead he died of a stroke at the age of 61.

Frankenstein Castle may have held the secret ingredient to Dippel’s elixir of life. Even before Dippel lived there, the Frankenstein Castle was rumored to have its very own natural elixir of life hidden in the herb garden. According to legend, if a woman drinks from the secret spring on a full moon in early April she will be restored to the age she was on her wedding day.

The area surrounding Frankenstein Castle is strange too. The forest neighboring the castle has large, magnetic stones. The magnetic field around the stones is so strong that compasses can’t work properly in their vicinity. Throughout the ages witches used the stones for rituals and some people say they still do today. There is also a valley filled with rocks near the castle where, according to legend, a man-eating dragon was slain.

You should visit Germany and experience the strange occurrences associated with the Frankenstein Castle yourself!

Booking Your Trip to Germany

AESU offers unique, exciting travel programs for college students and young professionals at affordable rates. Each trip is action-packed and informal—designed just for people your own age. We are also able to design custom tours just for your group. See Germany during fun-packed trips, including the following packages: Euro Focus, Great Escape, and Euro Spree.

If you have any questions or want help booking your Germany adventure, please contact AESU by calling 800-638-7640 or fill out the contact form found on our website.

Categories: Blog and Germany | Tags: castle, frankenstein, and germany
This entry was posted on Thursday, October 22nd, 2015 at 6:19 pm . You can follow any responses to this entry through the RSS 2.0 feed. Both comments and pings are currently closed.