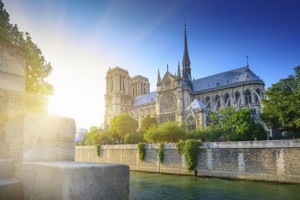 The gargoyles watch over the Notre Dame in the heart of the City of Lights.

When standing at the base of the Notre Dame, don’t forget to look up. Those aren’t daredevil tourists scaling the top of the old cathedral, they’re gargoyles, and they’ve been watching over Paris since the Notre Dame was erected in 1163.

The half-man, half beast demon looking creatures carved out of stone adorn the gutters of the Cathedral of Notre Dame in Paris. Gargoyle comes from the Latin word, meaning gullet or drain. Those crouching monsters that oversee the City of Lights contain a passageway inside that carries rainwater from the roof and out of the gargoyle’s mouth.

A History of the Gargoyle

Gargoyles have been used throughout the ages. In Ancient Egyptian architecture, gargoyles were prominently sculpted in the form of a lion’s head. Similar lion-mouthed waterspouts were also recorded on the Greek temples. Currently, there are 39 remaining lion-headed water drains on the Temple of Zeus. Originally, there were 102 gargoyles populating the Temple’s gutters, but they have since fallen off or been replaced.

The Catholic Church’s primary use of the gargoyle was to illustrate evil. The church wanted to convey a realistic image of the possibility of a damned afterlife. The Gothic idea was one of pain and suffering and the buildings loomed over the citizens in a romantically dramatic cloud. The gargoyles are represented by demons and monsters to insinuate safety and sanctity inside of the cathedral.

When exploring the steps and halls of the Notre Dame, you may be incorrect in labeling a few of those carved monsters as gargoyles. The Catholic Church provides you with an official pamphlet upon entering the cathedral that supplies you with the correct terminology.

Chimera are ornamental-only sculptures. These statues are often depicted as monsters or mythical beasts. The two most famous types of chimera are the Wyvern, a two-footed dragon, and the Stryga, known as the “spitting gargoyle”.

This is the genetic term for stone carvings, regardless of whether they carry water.

Gargoyles are chimera and grotesques. They are ornamental, stone carvings that serve a functional purpose. Before you go ahead calling a spade a spade, make sure that it drains water, first.

Discover the Gargoyles Face to Face With AESU!

Experience an exhilarating French adventure on the Cosmopolitan,Explorer, and Continental tours. It’s never too late to get a taste of a multitude of exciting cultures!

Categories: AESU World Travel and Blog | Tags: gargoyles and notre dame
This entry was posted on Wednesday, September 7th, 2016 at 4:42 pm . You can follow any responses to this entry through the RSS 2.0 feed. Both comments and pings are currently closed.