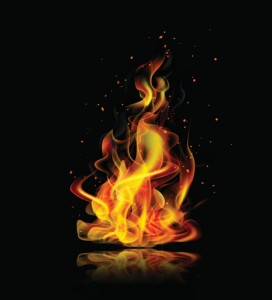 What began as a small flame eventually blazed across London.

On September 2, 1666, a baker by the name of Thomas Farriner allegedly started a small fire that would blaze through London for 3 days, leaving 436 acres of the city completely destroyed. The 350th anniversary of this historical disaster will be marked by a series of art installations, performances, and other events in London just later this week.

In the 17th century, the citizens of London were less aware of fire dangers as they are today. Buildings were made of timber, covered in pitch, and then tightly packed together. Men and women kept candles lit in every room as John Donne wrote rhymes of fleas that bounced around on his bed made of straw. The British lived and breathed in a fire hazard, and fires were so common that when the blaze initially occurred on September 2, most people disregarded it completely.

The fire began on Pudding Lane, the Centre of London, in the shop belonging to Farriner, King Charles II’s baker. When Farriner was accused, he denied everything. He said that his oven had been properly raked out before he went to bed and could not have been the cause. Some say it was the fault of the maid, who failed to put out the ovens at the end of the night. No matter the individual, most of the evidence leads to the specific area of Farriner’s dwelling as the cause.

Putting Out the Fire

In a desperate attempt to end the fast moving fire, Samuel Pepys has the idea of blowing up buildings to remove a trail of wood for the fire to follow. Pepys, a diarist, described the tragedy as “a noise and cracking and thunder of people, the fall of towers, houses, and churches, was like a hideous storm.” The flame raged from September 2 to September 5, 1666. More than 13,200 houses and 84 churches were destroyed. 100,000 people were left homeless and displaced.

In honor of this tragedy, London’s Burning, a festival of arts and ideas will be taking place across the capital. Citizens and tourists will be able to take part in a week of exhibitions, walks, talks, lectures, and other events in remembrance of one of the most significant historical events in London’s history.

Categories: AESU World Travel and Europe | Tags: great fire, London, and world travel
This entry was posted on Wednesday, August 31st, 2016 at 9:21 am . You can follow any responses to this entry through the RSS 2.0 feed. Both comments and pings are currently closed.