And you thought you were getting old. Ludwig van Beethoven, one of the most widely-known German composers, was born 245 years ago today—on December 17th, 1770. His compositions are not only brilliant, but some of the most elegant pieces were composed within the last 10 years before his death. Given he was quite deaf by then, his musical accomplishments are the hallmark of determination and passion. 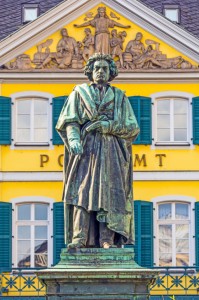 The Beethoven Monument in Bonn, Germany

The price of a musical prodigy

Beethoven lived with his parents and siblings in Bonn, Germany. He also wasn’t the first of the Beethoven family to pursue a musical career. His father Johann was a court singer of mediocre ability, but his grandfather (and namesake) Kapellmeister Ludwig was a highly-treasured, successful musician in Bonn.

Unfortunately, the pressure for young Ludwig to surpass the grandeur of his grandfather and become a musical prodigy had a heavy price. His father was known to be very brutal in his lessons, with punishments involving floggings, being locked in a cellar, and being kept awake to practice.

Despite tragically being forced to devote his entire childhood to music, Beethoven lived on to become one of the greatest musical composers of all time, and Germans will proudly agree. One of the things Germany is known for beyond their leckeres Bier (delicious beer for those not fluent in Deustch) and festivals is their prominent music culture. After all, the famous Sebastian Bach was also German. We like to think Beethoven inspired, and continues to inspire, the celebration of incredible music.

In our celebration of this great composer’s birthday—and someone always being older than us—we’ve picked out some neat Beethoven facts to share with your music-minded mates.

Categories: Blog and Germany | Tags: beethoven and germany
This entry was posted on Thursday, December 17th, 2015 at 4:00 pm . You can follow any responses to this entry through the RSS 2.0 feed. Both comments and pings are currently closed.