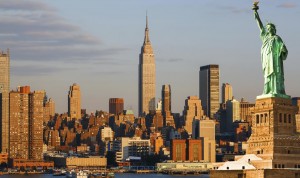 Independence Day (no, not the Will Smith movie) is right around the corner. The 4th of July: the anniversary of the day our Forefathers put pen to paper and signed the Declaration of Independence, proclaiming our independence from Great Britain. So we got to thinking about some of the prominent symbols of American freedom. And what is bigger – literally and figuratively – than the Statue of Liberty? But what many Americans don’t know is that this very-American symbol was actually made in France.

The History of the Statue of Liberty starts in France

Because of fundraising issues, the statue, which was originally supposed to be finished by 1876, did not even begin construction until 1875. It was finally finished in 1885 before it was disassembled, packed in more than 200 crates, and shipped to New York City, where it was reassembled and placed upon its pedestal. President Grover Cleveland officially dedicated the Statue of Liberty on October 28, 1886.

Today, the Statue of Liberty is one of the world’s most recognizable landmarks, remaining a symbol of our nation’s freedom and democracy.

AESU, the most trusted name in travel, offers unique, exciting travel programs for college students and young professionals at affordable rates. Each trip is action-packed and informal—designed just for people your own age. We have several affordable European packages with stops in France, including our Explorer, Euro Focus, Cosmopolitan, and Great Escape packages.

If you have any questions about The Statue of Liberty or any of our Affordable European Vacation Packages, please contact AESU by calling 800-638-7640 or fill out the contact form found on our website. And don’t forget to check out all of our great Travel Tips, especially the Travel Tips for Europe, before you head overseas.

Categories: Blog and France | Tags: france, History, and Statue of Liberty
This entry was posted on Thursday, July 3rd, 2014 at 12:57 pm . You can follow any responses to this entry through the RSS 2.0 feed. Both comments and pings are currently closed.