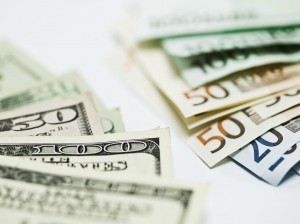 With the U.S. dollar and Euro closer in value than ever (well, close to it) – $1 is the equivalent of 0.88 Euros – there has never been a better time to consider that trip overseas. And AESU, the most trusted name in travel, can help you take advantage of that exchange rate. We offer numerous affordable European trips designed for students and young professionals. Each life-enriching program is carefully planned and executed with time for fun and adventure built in.

The U.S. Dollar vs. the Euro

Thanks to the resurgent American economy and a slumping European one, the two currencies are now closer in value than they have been in recent memory. And that trend is only going to continue. Goldman Sachs (GS) believes the U.S. dollar will catch the Euro by years end, the first time the two currencies will be equal since 2002.

“It could go to parity (equivalence) if the European Central Bank really pumps up stimulus. That would be a landmark event,” said Paul Christopher, head of international strategy at the Wells Fargo Investment Institute.

So what does all of this mean for you? Cheaper trips to Europe! Your hard-earned dollars will go a lot further than they did just five years ago.

There Has Never Been a Better Time to Travel to Europe

“Wouldn’t want to miss this, no regrets.” – Sean S

Want help booking one of our Affordable Trips to Europe? Please contact AESU by calling 800-638-7640 or fill out the contact form found on our website. And don’t forget to check out all of our great Travel Tips, especially the Travel Tips for Europe, before you head overseas.

Categories: Blog and Europe | Tags: Dollar and Euro
This entry was posted on Thursday, January 29th, 2015 at 7:47 pm . You can follow any responses to this entry through the RSS 2.0 feed. Both comments and pings are currently closed.