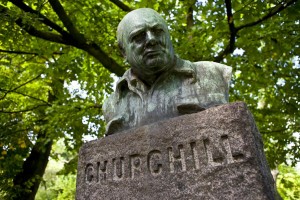 “Success is not final, failure is not fatal: it is the courage to continue that counts.” – Winston Churchill

2015 marks the 50th anniversary of former British Prime Minister Winston Churchill’s death. Churchill passed away on January 24, 1965, but his memory lives on.

Winston Churchill wore many hats during his lifetime. He was an officer in the British army, a historian, a Nobel Prize winning writer (1953), and an artist. He was even the first honorary citizen of the United States (1963). Still, Churchill is remembered most as one of the greatest wartime leaders of the 20th century. It was Churchill’s actions during the Second World War that forever cemented him in the history books.

Churchill became Prime Minister on May 10, 1940, the same day that Germany and Hitler invaded France and the Low Countries. Churchill’s policy was simple: “victory at all costs” through “blood, toil, tears and sweat.” This strong stance and steadfast refusal to accept defeat helped raise British morale when it needed it most, especially during the difficult early days of the war. Churchill was particularly popular for his speeches and radio broadcasts, which helped inspire the British people and encourage the United States to join the cause.

What Are the Churchill War Rooms?

The Churchill War Rooms is one of five branches of the Imperial War Museum in London, England. The museum is open daily from 9:30 am – 6:00 pm and is comprised of two parts:

Planning a Trip to the Churchill War Rooms

AESU offers several trips to London: Cosmopolitan, Explorer, Euro Focus, Great Escape, and Euro Spree. Click Here to take a look at all of our trips!

Want help booking one of our Affordable Trips to Europe? Please contact AESU by calling 800-638-7640 or fill out the contact form found on our website. And don’t forget to check out all of our great Travel Tips, especially the Travel Tips for Europe, before you head overseas.

Categories: Blog and England | Tags: Churchill War Rooms
This entry was posted on Thursday, February 5th, 2015 at 8:39 pm . You can follow any responses to this entry through the RSS 2.0 feed. Both comments and pings are currently closed.