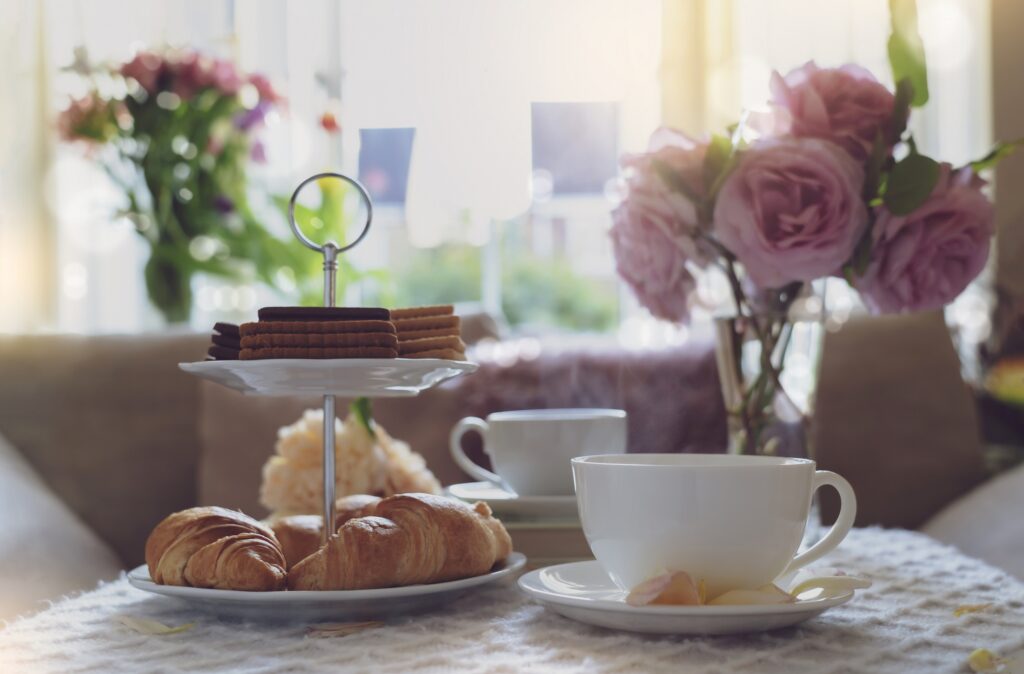 Afternoon tea and high tea refer to two separate sets of English tea traditions with radically different origins, reflecting the separation between the aristocracy and the working class during the Industrial Revolution.

Tea has been an important part of British history and culture ever since the first tea leaves were brought to the empire in the 17th century. Great Britain has consistently been among the world leaders in annual tea consumption and an entire culture has built up around drinking it. The two most important tea traditions in Britain are afternoon tea and high tea – while many use these terms interchangeably, they actually refer to two separate sets of traditions with radically different origins. Let’s dive deeper into the differences between afternoon tea and high tea!

Afternoon tea refers to the practice of enjoying a treat of tea with light snacks to accompany the drink. Usually, finger sandwiches, scones, and cake are the snacks on hand for this tradition. The tradition of afternoon tea has royal origins, as it became fashionable in the early 1800’s thanks to Anna, the 7th Duchess of Bedford. Back in those days, dinner was usually served at about 8 or 9 at night, and Anna wanted something to tide her over between lunch and dinner, so she would order tea, cakes, and bread and butter to her room. Later she would invite various friends over to join her, and this practice quickly spread throughout London and the rest of the country. Nowadays, afternoon tea is seen as a special treat by most of the British public – since it is served at about 4 PM, many working adults simply don’t have the time to indulge except when on holiday. However, it is still seen as a quaint, elegant tradition, and many Brits do enjoy indulging in afternoon tea when they can!

High Tea – Tea as Part of a Full Meal

The tradition of high tea reflects the two different Britains of the Industrial Revolution. Afternoon tea was taken primarily by the rich and wealthy – those who didn’t have to put in long hours at a factory, in other words. For the masses, the opportunity to enjoy tea simply had to wait until after a long, hard day of work – and by this point, they would need sustenance to help them recover their energy and strength. Tea was served with hearty dishes for these workers, and this would come to be known as “high tea” since workers would usually be served meals at a “high” table or counter. Even today, in many working-class homes throughout Britain, the post-work evening meal is referred to as simply “tea”, further emphasizing the drink’s importance in British culture.

Looking to travel this year? We still have space available on some of our exciting journeys such as Moroccan Magic, Portugal Adventure, Destination Dubai, and Peru’s Inca Trail!

Categories: England | Tags: Afternoon Tea, england, High Tea, tea, and tea time
This entry was posted on Wednesday, June 16th, 2021 at 10:28 am . You can follow any responses to this entry through the RSS 2.0 feed. Both comments and pings are currently closed.