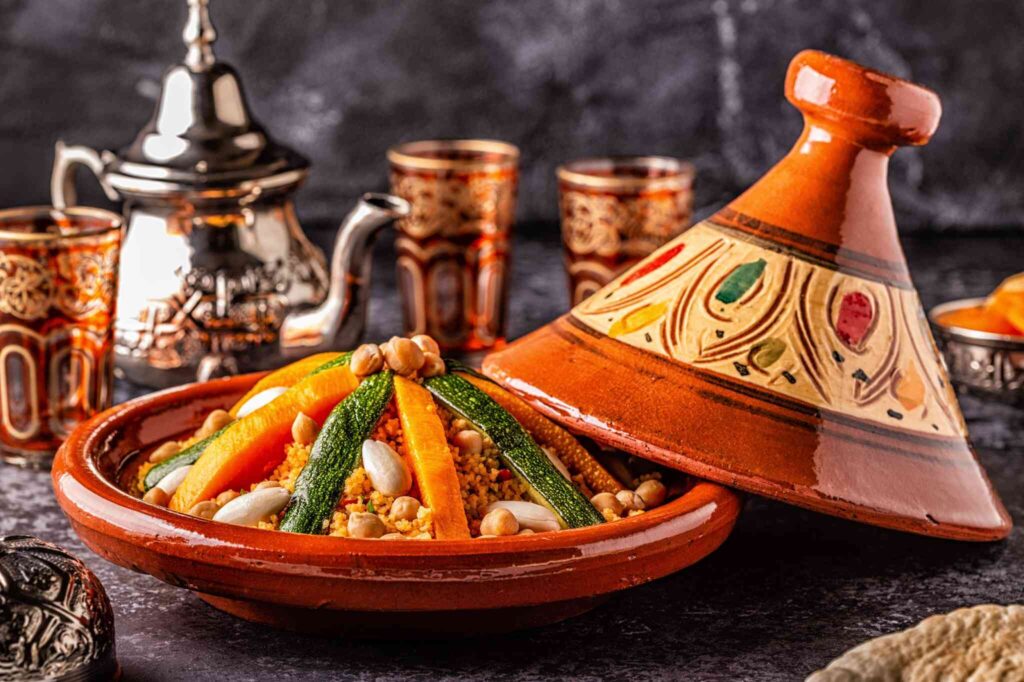 Tagine is unique to Morocco and is so good, you’ll want to bring your own tagine pot home with you!

Morocco is known as a great travel destination for several reasons. Visiting Rick’s Café definitely draws a lot of Americans who love the movie Casablanca and want to imagine themselves as Humphrey Bogart or Ingrid Bergman for a night. The souks of cities like Marrakesh and Fes have operated for hundreds of years, and those who find haggling thrilling will have the time of their lives negotiating with the famed Moroccan souk salesmen! One thing which goes under the radar for a lot of visitors is Moroccan cuisine. You may know of Moroccan mint tea, but do you know about tagines? Tagine cooking is one of the major highlights of any trip to Morocco – it is so life-changing, many tourists end up importing their own tagine cookware back home!

In a general sense, tagine is a stew or a casserole-style dish that is cooked in a specially shaped pot, also called a tagine. It originated from the Berbers, the native, nomadic peoples of the deserts of North Africa whose culture greatly influenced the development of Moroccan culture as a whole. Some people believe it’s more accurate to refer to tagine cooking as a style of cooking, rather than as a specific type of dish – this makes sense considering the sheer variety of different stews that can be made in a tagine pot!

One common trait of nearly all tagine dishes is the liberal use of spices and aromatics. The most popular tagines in Morocco tend to feature both sweet and savory flavors – you’ll have a chicken tagine with lemons and olives, or lamb tagine with prunes. Spices used include saffron, ginger, coriander, cinnamon, paprika, turmeric, and many others. These dishes can even be completely vegetarian as well!

One of the unique aspects of tagine cooking is the use of the tagine pot, which is unlike anything you may have seen before in the kitchen. It is flat on the bottom, but conical on top. This shape also lends to the amazing deliciousness of a tagine dish –the conical top captures all of the flavors during cooking, condenses, and then drips back down into the food, continually basting it. For the Berbers, who lived in the desert where water was hard to come by, this shape allowed them to conserve water during cooking  – and also save space during their nomadic wandering since the cooking vessel was also used to serve the meal!

Looking to travel this year? We still have space available on some of our exciting journeys such as Portugal Adventure, Destination Dubai, and Peru’s Inca Trail!

Categories: Morocco | Tags: cuisine, Morocco, North Africa, and tagine
This entry was posted on Wednesday, June 23rd, 2021 at 10:31 am . You can follow any responses to this entry through the RSS 2.0 feed. Both comments and pings are currently closed.