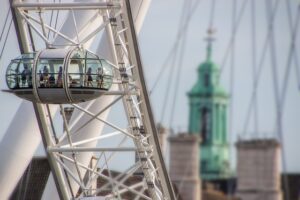 If a trip to London is on your horizon, make sure to set some time aside to visit one of the city’s famous landmarks: the London Eye!

London boasts no shortage of instantly recognizable icons. Westminster Abbey, Big Ben, Camden Market, the Tube – each of these have been quintessentially London for a long time. In recent years, the London Eye has also become one of those icons and is now one of the most popular tourist attractions in the world. In fact, it receives more visitors in an average year than the Taj Mahal and the Pyramids in Giza! During your next trip to London, make sure you set aside time to view the splendor of the British capital from the heights of the Eye!

The London Eye was designed by Julia Barfield and David Marks of Marks Barfield Architects in 1999 as a special way to mark the turning of the Millennium in London. It was originally only meant to be temporary – the initial agreement with Lambeth Council gave it a five-year term at its location on the banks of the Thames. However, the London Eye proved so popular that it was granted a permanent license in 2002.

While one might be tempted to call it a Ferris wheel, technically its design makes it a “cantilevered observation wheel”. What’s the difference? The most noticeable difference is the location of the carriages. Ferris wheel carriages hang low, as they are subject to gravity – while those of a cantilevered observation wheel stick out from the outside of the wheel during the entirety of the rotation.

Fun Facts About the London Eye

Looking to travel this year? We still have space available on some of our exciting journeys such as  Portugal Adventure, Destination Dubai, and Peru’s Inca Trail!

Categories: England | Tags: London, London Eye, sightseeing, UK, and Visit London
This entry was posted on Wednesday, June 30th, 2021 at 10:49 am . You can follow any responses to this entry through the RSS 2.0 feed. Both comments and pings are currently closed.