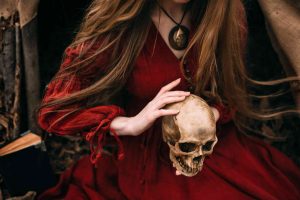 The theater thrives on superstition. It’s better to inform an actor to break a limb than to wish them an ounce of luck. A bad dress rehearsal always makes for a successful opening night, and don’t ever think about bringing a peacock feather inside of the auditorium. These superstitions are merely fun practices of the theater, but one has long been part of the actor’s tradition: Don’t say “Macbeth!”

The curse is thought to have been created by Shakespeare himself, after casting real witches in his original production of the play. The black magic spells recited by the Weird Sisters are believed to have cast a terrible curse on Shakespeare’s magnum opus. Since its first performance in 1606, countless disasters have occurred in playhouses around the world such as:

-In 1606, an actor died backstage during the opening night of Macbeth.

-In 1849, the audience was so affected by the performance that a riot broke out and several people were killed.

-In 1934, four different actors played Macbeth in a single week due to various illnesses.

-In 1953, Charlton Heston’s legs suffered severe burns. It was later discovered that his lights had been soaked in kerosene.

If an actor does speak the name of the play, they must complete a series of cleansing rituals to ward off the evil they have brought inside of the theater. The ritual includes turning three times, spitting over one’s shoulder, and reciting a line from another of Shakespeare’s plays. Some production groups, that take the curse seriously, do not let the offender back into the theater for fear that the curse may follow them.

AESU offers several trips to London and the UK, including Cosmopolitan, Euro Spree, Explorer, Euro Focus, and our most popular tour, Great Escape. Explore England and the home of William Shakespeare.

Categories: England | Tags: Macbeth, shakespeare, and Visit England
This entry was posted on Wednesday, October 25th, 2017 at 11:28 am . You can follow any responses to this entry through the RSS 2.0 feed. Both comments and pings are currently closed.