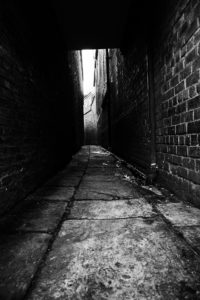 On August 31, 1888, the body of Mary Ann Nichols was discovered on Buck’s Row in Whitechapel, London. Most of her clothing was removed, and she had suffered deep slashes to her throat and abdomen. She was the first known victim of Jack the Ripper, the Victorian murderer responsible for killing several women in the late 19th century. Now, 130 years later, interest in the unsolved murders has resurfaced in books, blogs, and even a national crime conference (held this past September). The mystery continues…

The Letter From Hell

After a series of brutal murders, the head of the Whitechapel vigilante organization received a later postmarked from “Hell.” The contents of the envelope included a handwritten letter and half of a pickled kidney. The anonymous writer indicated that Jack the Ripper had fried and eaten the other half of the kidney, and offered to send “the bloody knife” along later.

The kidney was not the only package sent to the police during this time. Hundreds of letters were mailed, all purported to be written by Jack himself. It was later suggested that journalists forged the letters to attract readers, but there is no real evidence of any speculation.

Throughout the years, multiple people have been accused in the case of Jack the Ripper. The novelist Patricia Cornwall wrote extensively in support of her theory that “Jack” was the artist, Walter Sickert who lived nearby and often painted nude women. The victim’s former lovers were called into question after the attacks, and the Duke of Clarence was once considered a major suspect due to his reputation as a sexual deviant.

During the period of the murders, the Revd Lord Sidney Godolphin Osborne wrote a series of letters to The Times suggesting that “female hands” might be behind the murders. Modern historians have since played with the idea of a female suspect, but the mystery remains.

Explore the crime scene… if you dare. Visit the Jack the Ripper Museum, Ten Bells Pub, Former Frying Pan Pub (Brick Lane), and The Crime Museum in London! Experience the mean streets of the 19th century East End on a walking tour, like the Jack Ripper Tour!

Categories: England | Tags: Jack the Ripper and London
This entry was posted on Wednesday, October 24th, 2018 at 10:43 am . You can follow any responses to this entry through the RSS 2.0 feed. You can leave a response, or trackback from your own site.