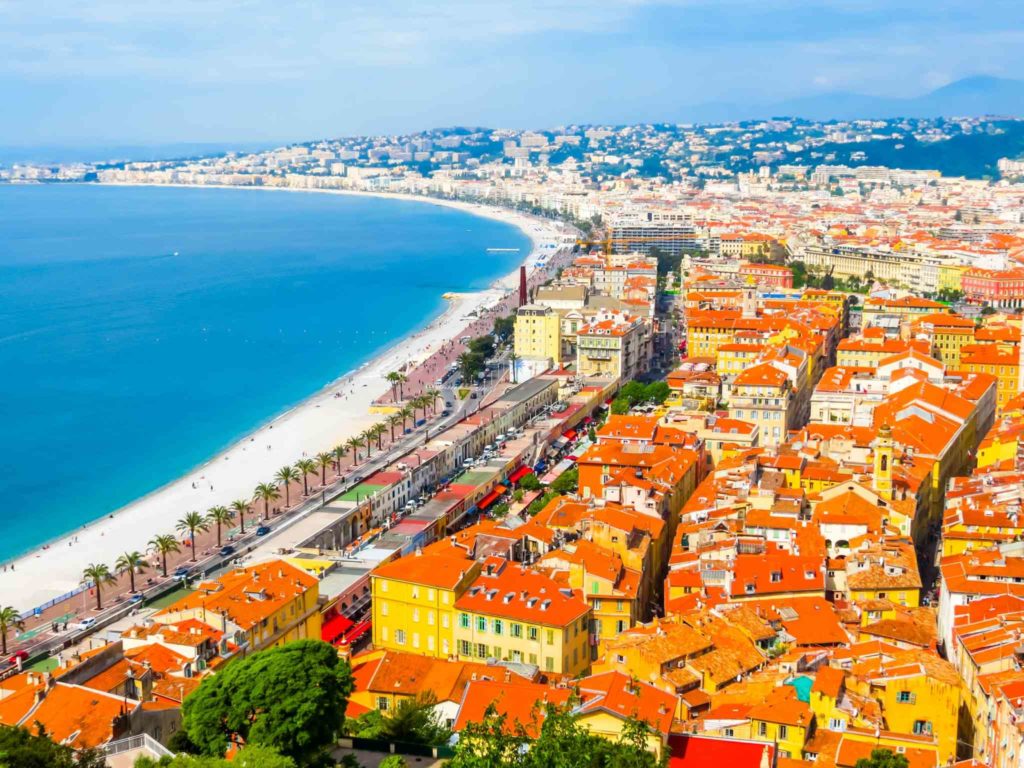 The jewel of the French Riviera, Nice combines French and Mediterranean charm and feels a world away from stuffy Paris!

With sunshine and mild weather year-round, it is said that Nice is to Paris what Los Angeles is to New York City. This extends to the temperament of the residents as well – while (some) Parisians are characterized as cold and condescending, the people of Nice are warm, friendly, and welcoming to visitors! The city has a distinctly Mediterranean character reminiscent of towns on the Italian coast – no wonder owing to its prime location on the Côte d’Azur close to the border with Italy! Nice has something for just about everyone, from soaking up the sun on the beaches to exploring the charming old city and more. Plan your next visit today with these great things to see and do!

Old Town Nice is full of old cobblestone streets and narrow alleys that have a uniquely Mediterranean charm. Known as “Babazouk”, Vieille Ville starts on the western side of Castle Hill (Colline du Château) and its borders are comprised of wide-open boulevards. What can you see and do in Old Town? You can visit the famed Marché aux Fleurs, a traditional flower market open every day except Mondays. Visit the former palace of the Kings of Sardinia, Palais de la Préfecture, as well as the Nice Cathedral north of the Cours Saleya. Many other famed cathedrals and palaces can be found among the narrow streets of the Old Town of Nice.

Sunbathing at the Promenade des Anglais

This is the most famous road in Nice, curving alongside the Mediterranean beaches for about 4 miles. The road, literally meaning “the English Promenade”, was designed and built by an Englishman during the early 1800s, when Nice became a popular tourist destination amongst the English aristocracy. While the road once saw vehicular traffic, it is now a pedestrian-only walkway and a great way to spend some time soaking in the sun and the salty sea breeze!

One of the most famed painters in French history, Henri Matisse spent the latter half of his life in Nice and this museum houses the most comprehensive collection of his works in the world. Featuring 31 paintings and 57 sculptures in its permanent collection, as well as temporary exhibits and an olive grove on the grounds, the Matisse Museum is a must-see for anyone interested in art during their time in Nice.

Close to the Matisse Museum is the Monastére Notre-Dame-de-Cimiez, originally a Benedictine institution that was later taken over by the Franciscan order in the 16th century. The monastery is also notable for being built directly above the ruins of the ancient Roman city of Cemenelum, and traces of the Roman baths and amphitheater are still present beneath the monastery grounds. The current iteration of the monastery building is not wholly original but is characterized by an extensive restoration that dates to 1850 and was done according to the Gothic style.

Categories: France | Tags: Cote d'Azur, france, French Riviera, and Nice
This entry was posted on Wednesday, February 3rd, 2021 at 10:30 am . You can follow any responses to this entry through the RSS 2.0 feed. Both comments and pings are currently closed.