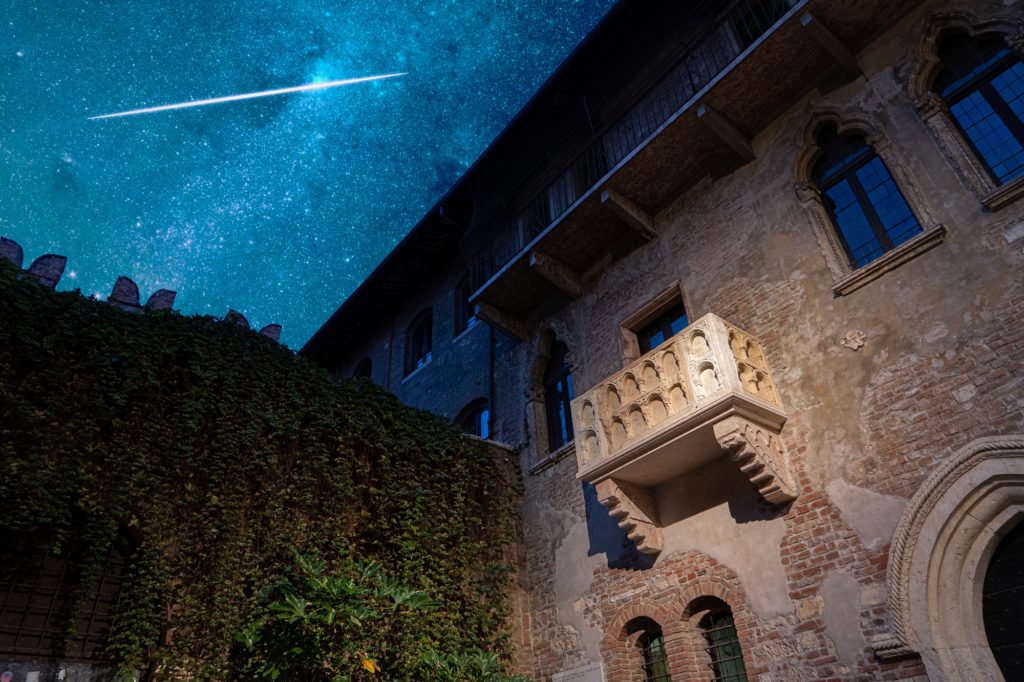 Relive the famed balcony scene from Romeo and Juliet at the Casa di Giulietta in Verona!

Valentine’s Day is coming up this Sunday! All over the world, lovers young and old offer gifts to one another as an expression of love, or even just friendship. Of course, when talking about love, one thinks of perhaps the most famous tragic love story in Western literature – the story of Romeo and Juliet. The tale of the two star-crossed lovers told by William Shakespeare has been staged throughout its 400+ year history and has been adapted into movies and musicals, depicted in paintings and sculpture, and influenced musicians across the spectrum.

Summary of the Play

Romeo and Juliet is set in Verona, Italy, and begins with a brawl between the servants of the Montague and Capulet families who are mortal enemies. A ball is held at the Capulet household during which Romeo and Juliet meet for the first time. It’s love at first sight, which is confirmed a little later during the famed “balcony scene”. After a tragic duel that results in the death of Romeo’s best friend Mercutio, Romeo inadvertently escalates the feud between the two families by slaying Mercutio’s killer, Juliet’s cousin Tybalt.

After this, Juliet is set to be wed to Count Paris against her wishes. She visits Friar Laurence who gives her a potion that will put her in a death-like state temporarily and promises to deliver Romeo news of the plan. However, this news does not reach him and he hears of Juliet’s death. He buys poison from an apothecary and goes to the crypt where Juliet’s body is being held, where he runs into Count Paris. They duel and Romeo slays Paris before drinking the poison and perishing. Juliet awakens, finds them both dead, and then commits suicide with Romeo’s dagger. The two families are then reconciled through the deaths of the two young lovers.

While there’s no evidence that Shakespeare himself ever set foot in Verona, that hasn’t stopped travelers and lovers of the play from flocking to the city. One of the most visited attractions in Verona is Casa di Giulietta, or Juliet’s House. Despite the fact that Juliet is a fictional character and never actually lived at this location, it is still worth visiting when coming to Verona. It dates to the 14th century and is a picturesque example of Gothic architecture – it even includes a balcony much like the one from the famed Balcony scene in the play! Local legend states that by touching the right breast of the statue of Juliet on the grounds of the home, it will bring you good luck in finding your true love – so it may be worth the visit even if you go solo! Despite it having the faintest of connections with the play, it’s still a romantic place to see while visiting Romeo and Juliet’s home city of Verona.

Categories: England and Italy | Tags: Romeo and Juliet, valentines day, and Verona
This entry was posted on Wednesday, February 10th, 2021 at 10:28 am . You can follow any responses to this entry through the RSS 2.0 feed. Both comments and pings are currently closed.