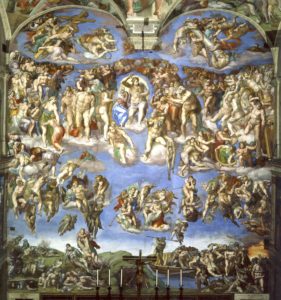 The Last Judgment, one of the many frescoes adorning the interior of the Sistine Chapel in Rome.

Rome is full of history, from the stately grandeur of ancient Roman ruins to the ornate beauty of Renaissance art, architecture, and more. While many landmarks are synonymous with the city, perhaps none are as venerated as the Sistine Chapel and its famed ceiling frescoes, created by Michelangelo on commission from Pope Julius II in the early 16th century. The Sistine Chapel not only has an important place in the art world, but as the current seat of the conclave, it is one of the most important locations for the Roman Catholic Church. Let’s take a closer look at this jewel of the Renaissance!

The History of the Sistine Chapel

Originally known as the Capella Magna or “Great Chapel”, Sistine was restored, renamed, and consecrated by Pope Sixtus IV in the late 1400’s. The Sistine Chapel is part of the Papal complex which currently makes up the small Vatican City sovereign state enclave within Rome – but in the Middle Ages and Renaissance periods, most of Europe fell under papal sovereignty through the Holy Roman Empire.

During Sixtus IV’s reign, a number of Renaissance painters came to the chapel to create a series of frescoes depicting the lives of Moses and Jesus Christ. Such names as Botticelli, Perugino, Rosselli, and others were involved in this first decoration. But it was the second push, Pope Julius II’s commission of Michelangelo to paint the ceiling, which had the greatest influence on the history of Western art. Despite its later influence, at the time Michelangelo did not care to take part in the project, imagining it to be a vehicle for a later downfall set up by his enemies. Nevertheless, after the fall and sacking of Rome by a rebellious Holy Roman Empire in 1527, Michelangelo returned to complete his magnum opus – the depiction of the Last Judgment over the altar at the chapel – from 1535 to 1541.

The Sistine Chapel has always been an important place for the Roman Catholic Church as it hosts important services in the Papal calendar whenever the pope is in Rome. However, it also began to host the conclave in 1492 – this is the process by which the world’s cardinals gather together to elect a new pope. Whenever a new pope is to be elected, a chimney is installed on the roof of the chapel – once the smoke from the chimney turns white, the world’s Catholics know that a new pope has been elected.

How to Get There

Take Line A (orange) on the Metro to Cipro-Musei Vaticani station. Try to avoid going on the last Sunday of the month – admission is free, which means the place gets packed. The museums are open from 9-6 Monday-Saturday and 9-2 on Sundays. Be sure to dress conservatively – the Sistine Chapel is a holy place for billions of Catholics around the world, and you may be turned away at the door if your attire does not match the atmosphere.

Categories: Italy | Tags: rome, Sistine Chapel, and Vatican City
This entry was posted on Wednesday, November 4th, 2020 at 10:30 am . You can follow any responses to this entry through the RSS 2.0 feed. Both comments and pings are currently closed.