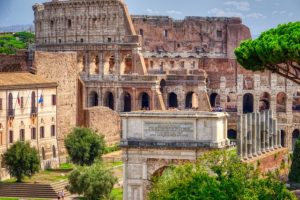 The Roman Colosseum is not only a landmark of Italy, but it is considered one of the New Seven Wonders of the World. This monumental structure, which has been around for thousands of years, is a popular tourist destination with a lot of history. If you are curious about how the Roman Colosseum was used in the time when it was built, then read on to for a quick history, and explore Rome with AESU!

The Colosseum was constructed around 70 to 80 AD. It was originally called the Flavian Amphitheater because it was overseen by a succession of three Roman emperors, Vespasian, Titus, and Domitian, during the Flavian Dynasty. Later, it was named the Colossus of Nero after one of the Roman Empires’ most notable, and infamous emperors, which is where the name Colosseum eventually came from. The main material of the Colosseum is travertine limestone, but it is also made up of cement, mortar, and even wood. The Colosseum took the work of over one hundred thousand slaves, and it was amazingly constructed in just under a decade and was one of the only freestanding structures of its kind at the time. It consists of a large sand arena in the bottom that is surrounded by the main oval structure, which holds enough seating room for up to 80,000 people. Underneath the Colosseum is a network of tunnels and rooms.

In its prime, the Colosseum was used as a gathering place, much like a stadium, for audiences from the poorest of the poor all the way up to the emperor. The Colosseum most popularly staged public spectacles such as fights to the death between gladiators, historical re-enactments, and other theatrical performances. It was also the site of many executions, including those of saints from the early Christian church. Indeed, the Colosseum has a varied and interesting history. It was an arena that held much violence at times, but it was also a place of fun and entertainment and a magnificent structure that still captures the imaginations of people today. If you are planning on traveling to Rome, make sure that you look into the ancient history of the Colosseum to get the most out of your visit.

Experience an exhilarating adventure to Italy on the Cosmopolitan tour, the Great Escape tour, and more!

Categories: Italy | Tags: AESU World Travel, italy, Roman Colosseum, rome, and world travel
This entry was posted on Wednesday, June 10th, 2020 at 11:01 am . You can follow any responses to this entry through the RSS 2.0 feed. Both comments and pings are currently closed.