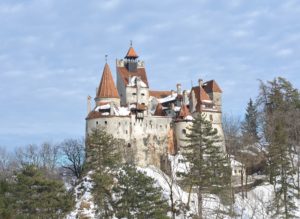 Dracula’s Castle in Romania highlight some of the best in Europe’s haunted castles!

The castles of Europe provide some of the most beautiful and immersive experiences you can have while in the Old World. They offer a picture into the world as it once was, with all the pageantry and pomp of royalty, and also the drudgery and desolation of servant life. Every castle in Europe has its stories, but some are creepier than others, with inexplicable events and disappearances coloring the local lore. With Halloween coming up this weekend, let us take a look at the best of Europe’s haunted castles that are worth exploring the next time you find yourself adventuring there!

Hampton Court Palace has become well-known in recent times for photographs taken by tourists which depict the apparent ghost of the Grey Lady – Dame Sybil Penn, a nurse of Prince Edward and Queen Elizabeth I – who is said to haunt the castle. Also famed as one of the palaces of Henry VIII, his fifth wife Catherine Howard also haunts the halls. Worth the short 12 mile trip from central London!

Bran Castle is a majestic structure constructed in the 13th century which served as the inspiration for Bram Stoker’s novel Dracula. It is thus also known as Dracula’s Castle. Curiously, Stoker never actually stepped foot inside the castle, but the enduring popularity of his novel have made Bran Castle a must-see for literature buffs and seekers of the paranormal alike.

Rather disturbingly, Houska Castle was never built to house people, as it is located basically in the middle of nowhere in the Czech Republic. It was built, however, on the sight of a crater, and it was said during the time of its construction in the 13th century that the crater was the gateway to hell. People reported seeing winged demons coming out of the crater – in fact, even today there are reports of winged creatures circling the castle to this day. The site was taken over by Nazi Germany during World War II, and gruesome human experiments were conducted. While this castle is visited quite often by those interested in paranormal activity, visitors never stay too long as they report feeling constantly watched while at the site.

Categories: Europe | Tags: castles, europe, halloween, haunted, and paranormal
This entry was posted on Wednesday, October 28th, 2020 at 2:39 pm . You can follow any responses to this entry through the RSS 2.0 feed. Both comments and pings are currently closed.