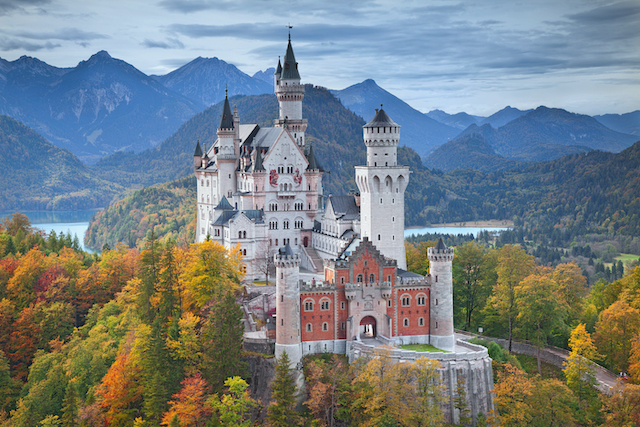 One of the most famous castles is Neuschwanstein Castle, a relatively recent construction that was the inspiration for the Sleeping Beauty Castle at Disneyland.

The castles of Europe have served as inspiration for artists and travelers for hundreds of years. Once upon a time, they were royal residences and served as places where nobility could display their opulence. As the monarchies of Europe fell, most of these castles fell to the hands of a civil state, who usually dedicated a new state entity to maintain these places of history for future generations. In more recent times, European castles have inspired the design of iconic castles from Disney films. We invite you to explore these castles for yourself on AESU’s multigenerational tour “Enchanted: A Fairytale Journey”, coming in 2023. One of the most famous of these castles is Neuschwanstein Castle, a relatively recent construction that was the inspiration for the Sleeping Beauty Castle at Disneyland – the oldest and arguably most iconic of all the Disney castles.

The Pinnacle of Architectural Romanticism

Neuschwanstein Castle, located in a secluded part of Bavaria in Germany near the Austrian border, was constructed near the end of the 19th century and is regarded as a peak of romanticism. Romanticism was the dominant artistic style of the early 19th century that emphasized individualism and nature, while regarding science and industrialization with suspicion. Neuschwanstein Castle, commissioned by King Ludwig II, was designed as a way for the King to live in his idea of a Middle Ages era castle. In this way, we could regard Neuschwanstein’s design as somewhat “retro” for the time. It was also designed as a monument to the works of Richard Wagner, a famed music composer whom Ludwig admired.

Spared from the Horrors of War

While Neuschwanstein Castle was designed to be a private residence for King Ludwig II, he passed away shortly after the castle opened, only getting to live there for less than half a year. The decision was made to open the castle to the public very soon after, even though construction continued. When Bavaria joined the German Empire, administration of the castle fell into the hands of a civic body formed for the purpose, the Bavarian Palace Department.

Neuschwanstein was spared from any damage during the first World War owing to its location far from the Western front. During the Second World War, it was used by the German fascist government as a depot to store precious works stolen from France. It is said that the SS had orders to blow up the castle during the final months of the war to prevent the works from falling into Allied hands, but the plan was not realized. And it was spared Allied bombing during the war as its location was seen as strategically insignificant. So Neuschwanstein Castle has been passed down to us today more or less original as it was constructed in the late 1800’s.

Are you ready to plan an adventure of a lifetime? AESU offers unique, thrilling travel programs for college students and young professionals at affordable rates. Each trip is action-packed and informal—designed just for people your own age. We are also able to design custom tours just for your group. We at AESU have our multi-generational alumni tour “Enchanted: A Fairytale Journey coming soon, which goes to Neuschwanstein!

Categories: Germany | Tags: castles, germany, and Neuschwanstein Castle
This entry was posted on Wednesday, August 17th, 2022 at 11:15 am . You can follow any responses to this entry through the RSS 2.0 feed. Both comments and pings are currently closed.