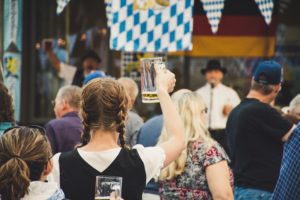 Cheers, or “prost”, to a great Oktoberfest 2019! Explore Germany with AESU!

The 186th Oktoberfest kicks off on September 21! The world’s largest Volksfest (beer festival and traveling funfair) is held annually in Munich, Bavaria, Germany, and attracts more than six million people from around the globe. Visitors enjoy amusement rides and games, but the real attraction is the vast quantities of Oktoberfest beer offered throughout the festival. Designated Oktoberfest beers conform to the Reinheitsgebot (German Beer Purity Law), and must be brewed within the city limits of Munich. Learn more about one of the most famous Oktoberfest breweries, and celebrate the season of Bavarian beer with AESU!

In the 16th century, the Duke of Bavaria and his counselors were dissatisfied with the dark, bitter beers popularly brewed throughout Munich. Rather than import other varieties of beer from Lower Saxony, the Duke decided to build a brewery of his own! With the help of the brewmaster of Geiseneld Monastery, Heimeran Pongraz, the Duke began planning and supervising the construction of the Hofbräuhaus am Platz in 1589. The Hofbräuhaus am Platz is known today as Munich’s famous Hofbräuhaus, and is one of Munich’s oldest beer halls.

At the beginning of the 20th century, the Hofbräuhaus was considered Munich’s number one attraction. The popularity of the Hofbräuhaus continued to grow well after World War II, and other countries demanded to have one of their own. Today, there are more than a dozen Hofbräuhaus throughout the world, including Dubai, Genova, and Chicago.

Categories: Germany | Tags: beer hall, Hofbrauhaus, oktoberfest, and Visit Germany
This entry was posted on Wednesday, September 18th, 2019 at 11:07 am . You can follow any responses to this entry through the RSS 2.0 feed. Both comments and pings are currently closed.