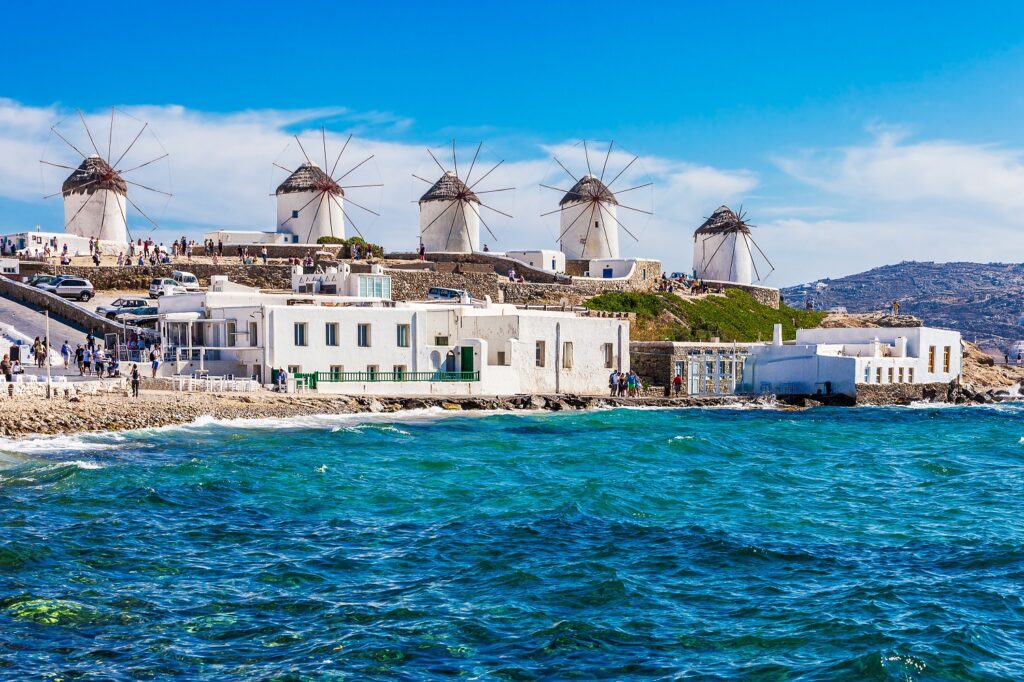 The famous windmills of Mykonos are one of the many amazing sights to see on a tour of the Greek Islands!

Greece, the origin of Western civilization, has something for any kind of traveler – ancient ruins dating back millennia, quaint Mediterranean towns, golden skies and blue seas, and so much more. One unique aspect of Greece is the sheer number of islands that make up the country – between 1200 and 6000 depending on the definition of “island”. Some of these islands have even played a major role in Greek history – and, indeed, the history of the West as a whole. AESU is proud to offer our Greek Island Hopper tour for the summer of 2022, where we will explore some of these islands as well as historic capital Athens. Here’s some of what to expect as we explore the Greek islands!

Known as the “Black Pearl of the Aegean” and featuring sharp red cliffs rising from the water, Santorini is also known as Thera. It was the site of one of the largest volcanic eruptions in history, which occurred about 3600 years ago during the height of the Minoan civilization (one of the precursors to the classical Greek civilization we all know). Archeologists have also speculated that the legend of the lost continent of Atlantis originated from this part of the world as well. During our tour, we will explore the archeological dig sites surrounding the area of the volcanic eruption, as well as take in the sights of the local towns around Santorini and try out some locally produced wines at wineries in the region.

Named after the grandson of Apollo, Mykonos played a critical role in classical Greek antiquity due to its close proximity with the island of Delos, which was a major religious center for the ancient Greeks. Today, the island is known primarily for its windmills and its friendly atmosphere. It is a quintessential Mediterranean island! We’ll be exploring the old town of the town of Mykonos as well as “Little Venice” or Alefkandra before taking in dinner at the old harbor.

We’ll finish our Greek Island Hopper tour by hopping to the Greek mainland to explore Athens, the birthplace of democracy and cultural center of the classical world. Athens has had a long, storied history and you can experience it all during our time here. Experience the Parthenon, the Acropolis, the temple of Olympian Zeus, the original Olympic Stadium and more!

Categories: Greece | Tags: Athens, greece, Greek Islands, Mykonos, and Santorini
This entry was posted on Wednesday, September 22nd, 2021 at 10:30 am . You can follow any responses to this entry through the RSS 2.0 feed. Both comments and pings are currently closed.