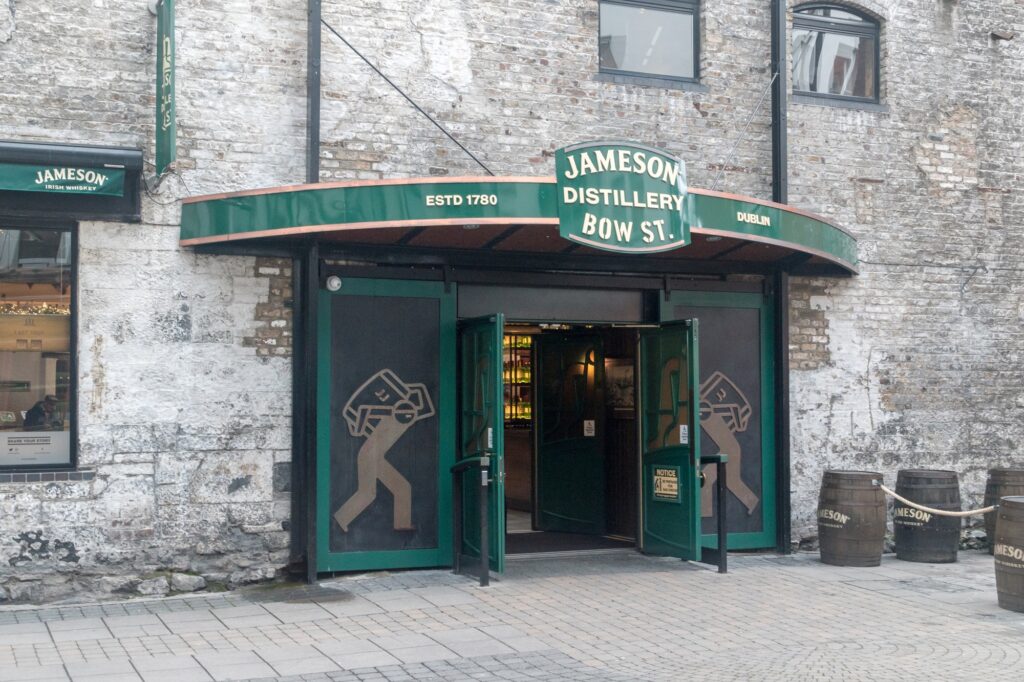 Famed worldwide, the original Jameson Distillery on Bow Street in Dublin is a must-visit next time you find yourself in the Fair City!

The city of Dublin is one of the top destinations for many American travelers and its not hard to see why. Featuring history, beauty, and one of the most welcoming cultures in the world, Dublin’s nickname of “The Fair City” is certainly well-earned. Many travelers come to Dublin hoping to tour the famed breweries and distilleries that dot the cityscape. And the Jameson Distillery is one of the oldest, most historic distilleries in all of Ireland! First opened in the late 18th century, the Jameson Distillery should be on your list of destinations if you have any interest in the production of authentic Irish whiskey.

History of the Jameson Distillery

Located on Bow Street in the Smithfield area of Dublin, the Jameson Distillery was originally opened as the Steins Family Bow Street Distillery in 1780. Only a few years later, a Scotsman by the name of John Jameson became the general manager of the distillery. By 1805, Jameson had taken full ownership of the distillery and expanded production. Renamed the John Jameson and Sons Irish Whiskey Company in 1810, the company faced stiff competition but ended up becoming one of Ireland’s most successful whiskey producers by the 19th century.

The start of the 20th century was difficult for Jameson as it was for all alcoholic beverage producers in Ireland at the time. There were two big reasons for this – the first was enactment of Prohibition in the United States in 1920. The second was a trade war with Great Britain, a direct result from the Irish declaration of independence in 1922. Scottish whisky producers were able to exploit this to send whisky very cheaply to Canada, which was then smuggled illegally across the border to America. For a time, it seemed as though Jameson and other iconic Irish whiskey distilleries might not survive these tough periods, but many did and continued to grow through the 20th century.

The Bow Street Distillery continued to produce Jameson whiskey products until 1976, when a new distillery was opened in Middleton, County Cork. The historic building then laid inactive until the visitor’s center was opened to the public in 1997!

The Jameson Bow Street Distillery is located in the Smithfield area of Dublin. There are several bus routes that will take you to Smithfield – alternatively you can take the tram to the Smithfield stop on the Red Line and walk 2 minutes to the distillery. The distillery is open 7 days a week at 11:00am – last tour starts at 5:30pm Sunday through Thursday and at 6:30pm Friday and Saturday. If you’re looking to purchase a souvenir bottle of whiskey to take with you, do note that Ireland regulates the sale of alcohol and you won’t be allowed to purchase a bottle before 10:30am during weekdays and before 12:30pm on Sundays. To book, contact the distillery via the links on their website!

Categories: Ireland | Tags: distillery tour, Dublin, ireland, and Jameson
This entry was posted on Wednesday, March 17th, 2021 at 10:31 am . You can follow any responses to this entry through the RSS 2.0 feed. Both comments and pings are currently closed.