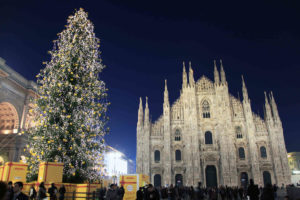 Get into the holiday spirit with AESU!

The people of Italy take the Christmas season very seriously. Depending on the region, holiday celebrations begin on the Day of the Immaculate Conception of Mary (December 8) and last until the day of Epiphany (January 6). Main piazzas throughout the country, from the Duomo di Milano to the Colosseum, come alive with bright lights and festive décor during this time. Learn more about Italy’s incredible traditions, and get into the holiday spirit with AESU!

Bagpipes may ignite a Scottish nostalgia for most, but the familiar sounds also fill the streets of Italy every December. Bagpipe-playing shepherds known as zampognari dress in traditional sheepskin cloaks and perform classic Christmas tunes right in the city centers! The tradition dates back to the ancient Roman era when the zampognari would come down from their hilltop homes to celebrate with family and friends in the city. While this tradition may not be as prominent as it once was, it is still thriving in the majority of the country’s southern regions, including Campania, Calabria, Basilicata, and Sicily.

Christmas has retained its religious roots in Italy, but that doesn’t mean some fun can’t be had with the traditional aspects of the holiday. When walking the streets of cities like Rome and Naples, visitors will find elaborate replicas of the traditional nativity scene featuring many creative modern-day twists. These unique creations can include anything from statues of local celebrities, famous soccer players, and politicians to Wi-Fi hotspots and QR codes that bring you to an educational video about the story of Christmas.

Food is an important part of Italian culture, especially around the holiday season. A traditional Italian Christmas comprises three meals: The Feast of the Seven Fishes on Christmas Eve, Christmas Day lunch, and Santo Stefano’s lunch on December 26th. The Feast of the Seven Fishes is a lighter meal typically with no meat but lots of seafood, such as swordfish, salmon, octopus, clams and salted cod known as baccalà. Lunch on Christmas Day is more meat-based, with cured meats as appetizers, and roasted veal or braised beef as the main entrée. Santo Stefano’s lunch is not quite as indulgent, and usually incorporates many creative meals made of leftovers from the days before!

A Visit From La Befana

On Epiphany Eve, La Befana brings presents for good boys and girls throughout Italy. Legend has it that the Three Wise Men invited La Befana to join their search for Christ, but she was too busy with housework and politely declined. Later on, the old woman changed her mind and continues to search for the child to this day, leaving presents behind as she travels. La Befana dolls are scattered throughout Italy during Christmastime, often depicted as an elderly woman riding a broomstick.

Experience an exhilarating adventure to Italy on the Cosmopolitan, Explorer, Italian Foodie Getaway tours, and more!

Categories: Italy | Tags: Christmas in Italy and italy
This entry was posted on Wednesday, December 12th, 2018 at 12:59 pm . You can follow any responses to this entry through the RSS 2.0 feed. You can leave a response, or trackback from your own site.