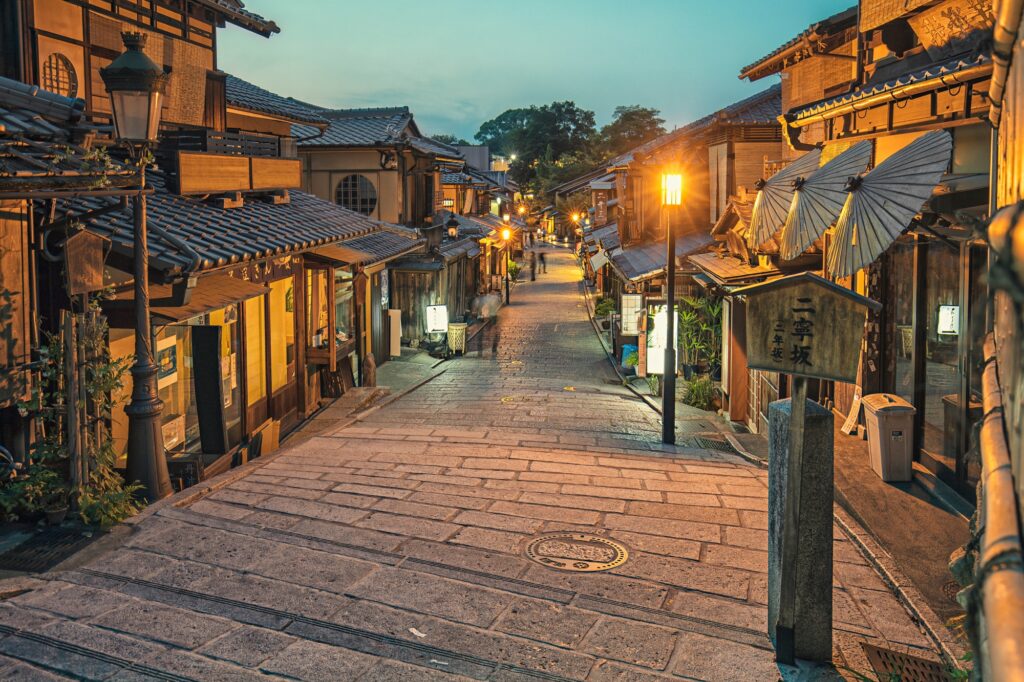 Kyoto’s Gion district is full of old Japanese charm and is commonly listed as one of the most beautiful places in all of Japan!

A trip to Japan is a study of contrasts. The massive sprawl of the concrete jungle in Tokyo coexists with greenery in places such as Inokashira and Yoyogi Parks. Modern and futuristic amenities sit alongside reminders of Japan’s illustrious history. You’ll even find old Shinto shrines and Buddhist temples within outdoor shopping arcades. Travelers to Japan often remark on the beauty that can be found there – and many argue Japan is the most beautiful place on Earth. We hope you’ll join us to discover it for yourself on our upcoming Essential Japan tour next year! Here are some of the most beautiful places in Japan that we are planning on seeing.

Located in the eastern part of the city on the old grounds of Edo Castle, the Imperial Palace is the full-time residence of the Emperor and Empress of Japan. While most of the complex is closed to the public, the Eastern gardens are open and make for a fantastic introduction to the city. The study of Japanese contrasts begins the moment you observe the beauty of the gardens amidst the backdrop of skyscrapers!

The most famous symbol of Japan in the world, Mount Fuji is the highest mountain in Japan and has captured the Japanese imagination for hundreds, if not thousands, of years. The area surrounding Fuji is known for its natural beauty and towns around the mountain feature traditional Japanese ryokan (inns) and onsen (hot springs). In addition, the soil of the area, particularly on the Shizuoka side, produces some of the best tea in all of Japan.

Kyoto was the capital of Japan for over a thousand years and features so many classically beautiful sights that it’s hard to see them all in one trip. However, special mention should be given to Kinkaku-ji, or the Temple of the Golden Pavilion. The temple site dates back to the end of the 14th century, but the current Golden Pavilion dates to 1955 as the original building was burned down by a novice monk in 1950. Covered extensively by a gold leaf coating, this building is a must-see when in Kyoto.

Gion is a wonderful place to take a stroll and enjoy the sights of everyday life in Kyoto. The Shirakawa river flows within the district, and many parts of this area have been declared as a national historical preservation district. Gion is also one of the most well-known geisha districts in all of Japan, and if you’re lucky, you may see a geiko or maiko walking along the old city streets.

Nara Park is famed for the wild sika deer that roam the grounds. According to local tales, the deer in Nara Park are considered sacred because of a visit from a Shinto god. They have been protected by the government ever since – in fact, up until the year 1637, the killing of one of these deer was punishable by death! Buy some senbei (rice biscuits) from local vendors to feed the deer, and don’t forget to check out the world’s largest wooden building at Todai-ji, located adjacent to the park grounds.

Categories: Japan | Tags: Japan, Kyoto, Mt. Fuji, Nara, and Tokyo
This entry was posted on Wednesday, September 1st, 2021 at 10:05 am . You can follow any responses to this entry through the RSS 2.0 feed. Both comments and pings are currently closed.