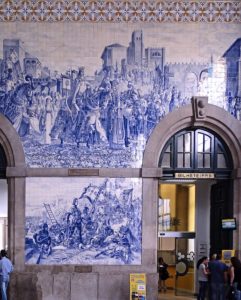 You will see them everywhere in Portugal, beautiful glazed tiles that are usually blue and feature an array of ornate designs. The azulejo tiles are a fixture of culture and design in many parts of Portugal, and you will even find them on famous buildings like the Sintra National Palace. Sometimes these tiles will form a scene depicting a popular saint or a time in history. But the history of the azulejo tiles themselves is just as colorful.

The azulejo tile can be traced back to as early as the 13th century when Moors formed the Arab Andalusian civilization by taking over parts of Europe in what is now Spain and Portugal before settling in North Africa. The Moors brought with them many elements of their culture, including these intricate glaze ceramic stones. Many people today mistakenly believe that the name “azulejo” came from the word Portuguese word “azul,” when it in fact came from the Arabic word “al-zalij” or “az-zulayj,” which roughly translates to “ceramic” or “polished stone.”

Despite the early presence of the Moors in Portugal, the popularity of azulejo tile didn’t truly begin until the 16th century when King Manuel I of Portugal visited Sevilla, Spain. He was so inspired by the tilework he found there that he brought it back to Portugal. At the time, Gothic architecture was the most common style of building, and many of the buildings had large walls with a lot of blank, undecorated space. The tiles grew quickly in popularity because of their blend of style and function. Adding these often large tiles over an entire wall helped to waterproof and insulate the wall, which helped trap warmth and reduce noise.

The most common design of azulejo tiles in Portugal can range from repeating geometric patterns to a full spread mural made of hundreds of tiles, similar to a mosaic. Blue and white is certainly the dominant color, which was believed to be inspired by Ming Dynasty porcelain designs from China. However, you will also see yellow, green and white tiles as well. Murals commonly depict historical events, or scenes, and symbols paying homage to historical figures, including King Manuel I himself. Azulejo tiles decorate both the inside and outsides of many buildings in Portugal, and it’s not uncommon to see the entire facade of a house covered in them. These iconic blue and white tiles have become a hallmark of architecture and beauty across Portugal.

Experience a nine-day adventure in Portugal with AESU! Check out the day-by-day itinerary, and experience Portuguese wine as it was meant to be enjoyed!

Categories: Portugal | Tags: Portugal and Visit Portugal
This entry was posted on Wednesday, April 29th, 2020 at 10:56 am . You can follow any responses to this entry through the RSS 2.0 feed. Both comments and pings are currently closed.