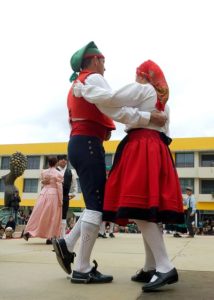 There are many layers and nuances to Fado music, including its historical significance.

One of the classics of Portuguese culture is Fado music. No trip to Portugal would be complete without experiencing the melodic melancholy of Fado being played on the viola or guitar and lively Fado dancing. There are many layers and nuances to Fado music, including its historical significance. Here is why Fado may be considered the heart of music in Portugal.

The name of Fado came from the Latin root “fatum” which means fate, and often the theme of Fado music incorporates aspects or destiny and loss. The origins of Fado are uncertain, but it was a popular style of the poor and working class. Fado music comes in two varieties of Fado, one from Lisbon and the other Coimbra. Although Lisbon’s style of Fado is the most popular, Coimbra’s version is considered the more classic and traditional style, dating back to the Middle Ages. While it is typical to clap after a Fado performance in Lisbon, to applaud to Coimbra-style Fado, people make a sound by clearing their throats. Modern Fado was developed in the nineteenth century, thanks to talented Portuguese artists like Maria Severa, Amália Rodrigues, Dulce Pontes, and Carlos do Carmo. Later, on November 27, 2011, UNESCO added Fado as an official Intangible Cultural Heritage.

In the early nineteenth century, Fado entertainers were fundamentally from the urban areas, where the people of the working class both sang and danced the Fado. During the later part of the nineteenth century, the tradition of dancing transitioned into a singer-focused style of music. Today, Fado is remembered as folk dancing. There were different styles of Fado dancing that vary depending on the style of music. Some of the dancing is energetic couples’ routines where the partners would lift their arms and spin around each other in an intricate rhythm. For a simpler version, groups also participated in large circle dances where they would all hold hands.

Looking to travel in 2020? Experience an exhilarating adventure on the Greek Island Odyssey tour, Egypt Valley of Kings tour, the Iceland Airwaves tours, and more!

Categories: Portugal | Tags: AESU World Travel, Portugal, Visit Portugal, and world travel
This entry was posted on Wednesday, July 1st, 2020 at 11:01 am . You can follow any responses to this entry through the RSS 2.0 feed. Both comments and pings are currently closed.