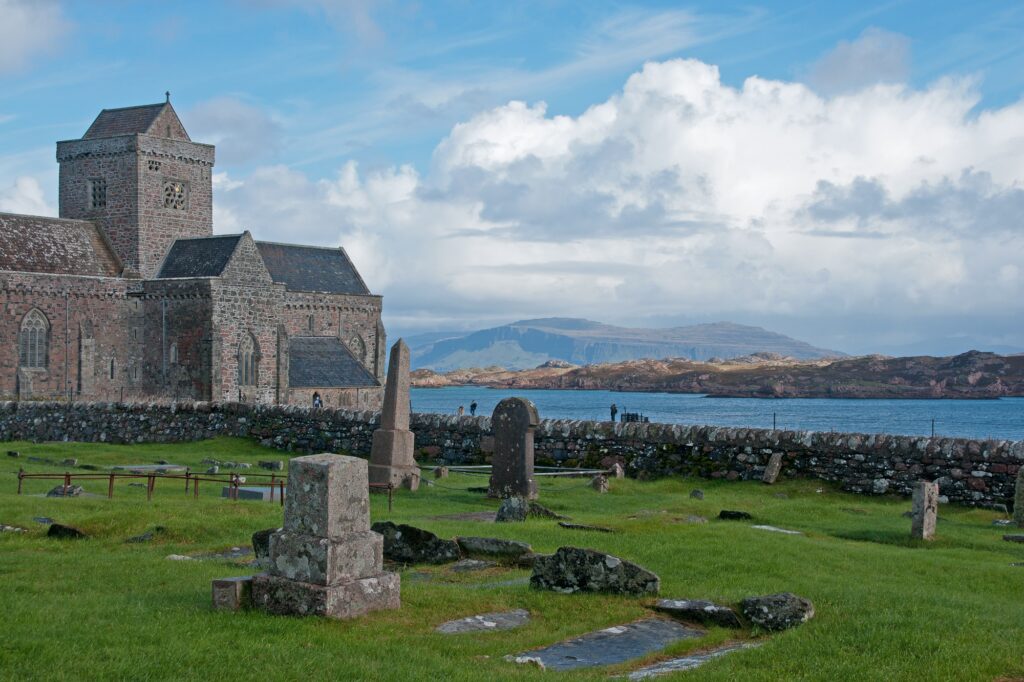 Iona Abbey – the final resting place of the real-life Macbeth and over 50 other Scottish Kings.

While it may hold the title of the shortest tragedy among the works of Shakespeare, Macbeth has also been one of the most admired and influential since its debut in 1606. The play examines the psychological damage that can be wrought on those who seek power for its own sake, and it has served as a cautionary tale for powerful figures for centuries. While the real-life historical Macbeth had very little in common with Shakespeare’s character, the Scotland within Macbeth is very real. You can even plan an entire tour of Scotland based on the play and the places the real-life Macbeth would have known! Here are just a few places to check out.

A small town located north of Inverness in the Scottish Highlands; historians believe that this is the birthplace of the historical Macbeth who would go on to become the King of Scotland in the 11th century. While the castle at Dingwall was constructed after Macbeth’s time, it’s worth seeing as it was once the largest castle north of Stirling – at one time the capital of Scotland.

The historical King Macbeth ruled over a portion of Scotland known as the Mormaerdom of Moray – an area encompassing more than the current Moray region. Moray is full of breathtaking landscapes along the coast and is one of the best places to see wild dolphins in the entire UK. Scotch whisky fans will also enjoy touring the numerous distilleries in the region!

In Shakespeare’s tragedy, Macbeth’s title is “Thane of Glamis”, and this would’ve been his castle. While the real-life Macbeth wasn’t connected with the castle, there are some interesting connections between history and the play here. For example, Malcolm II, the King of Scotland before Duncan, was murdered at Glamis Castle. There are also local legends of hidden rooms and monsters skulking the halls of the castle!

Historically, Moot Hill was the spot where coronation ceremonies for new kings were held. Shakespeare’s Macbeth was crowned here in the play, and it is almost certain the historical Macbeth would have been as well. The chapel on the hill is a recent construction, dating to the 19th century, as the original abbey at this location is lost to history.

A serene monastery located on an island, this is the final resting place of Macbeth, Duncan, and over 50 other Scottish kings. Founded by St. Columba in the 6th century, the abbey features beautiful stone carvings of Celtic crosses and other carvings, some of which date back to before the time of the historical Macbeth. Iona Abbey makes for a great ending to a tour of Macbeth’s Scotland, giving you the opportunity to quietly contemplate the lessons both of the play and of history.

Categories: Scotland | Tags: Highlands, Macbeth, Scotland, and shakespeare
This entry was posted on Wednesday, October 20th, 2021 at 10:29 am . You can follow any responses to this entry through the RSS 2.0 feed. Both comments and pings are currently closed.