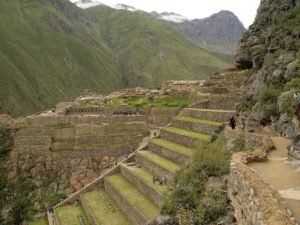 Ollantaytambo is the usual starting point for tours of the Incan ruins at Machu Picchu, including the famed Temple of the Sun.

One of the most important tourist destinations for travelers interested in the Incan Empire, Ollantaytambo is the gateway to the Machu Picchu ruins and some of the most unique attractions in South America. Located in the Sacred Valley of the Incas near Cuzco, this part of modern-day Peru was the location where the Inca peoples retreated during the Spanish conquest of the area and much of the town and surrounding area is laid out in the same fashion as it was during the heyday of the Incan civilization. The ruins, especially those of the Temple of the Sun, are stately, beautiful attractions that should be seen if you find yourself in this corner of Peru!

The History of Ollantaytambo

During the 1400s, the Inca chief Pachacuti (also known as Pachacutec) conquered the town of Ollantaytambo and began major agricultural construction works in the area with the goal of moving Incan nobility to the town and making it part of his personal estate. However, it was not long before the conquistadors from Spain arrived in the New World. The leader of the Incan people in this area at the time, Manco Inca, was the commander of the local resistance against Spanish conquest and converted Ollantaytambo into a fortress, strengthening defenses and moving people into the town. The Incan resistance actually inflicted a defeat of a Spanish expeditionary force on the plain near Mascabamba in 1536 – however, Manco Inca didn’t believe that his people could last long in this position and decided to withdraw to the forests of Vilcabamba, establishing the neo-Inca state. In 1540, Ollantaytambo was annexed by the Spanish Empire and placed under the administration of famed conquistador Hernando Pizarro. The town ruins were “discovered” by the West in the 19th century and tourists have come in droves to see the temple ruins ever since.

The Temple of the Sun

Ollantaytambo is the starting point for most travelers looking to explore the ruins of Machu Picchu, and perhaps the most famous of the building ruins is that of the Temple of the Sun. This was the site of several important religious rituals for the Incan people – only priests and high-ranking officials were allowed into the temple. It is said that ritualistic sacrifice was performed here – as the temple was built on high ground, the Inca believed that they were that much closer to the gods and would be better able to reap the benefits of these sacrifices. The trapezoid window in the temple’s main tower was positioned to capture the light of the sun during the annual winter solstice, which may have also played a role in some important religious rites.

Categories: South America | Tags: Incan Ruins, Machu Picchu, Ollantaytambo, Peru, and south america
This entry was posted on Wednesday, November 18th, 2020 at 10:29 am . You can follow any responses to this entry through the RSS 2.0 feed. Both comments and pings are currently closed.