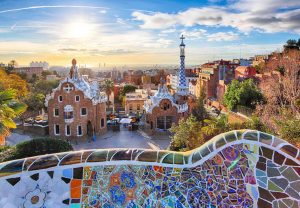 Take a tour, and discover Gaudi in Barcelona!

Exploring the streets of Barcelona is an experience unlike any other. Rather than navigating through gleaming glass skyscrapers, you’ll find yourself ducking under serpentine shaped halls and sauntering through an immense, dripping, Gothic sand castle. These striking and unusual buildings are the work of the visionary architect, Antoni Gaudi. Take a tour, and discover four fascinating pieces of Gaudi architecture in Barcelona!

The garden complex, known as Parc Güell, houses a series of curiously designed buildings (including Gaudi’s own home). The facade of each building is covered with brightly colored, irregular ceramic pieces, characteristic of the Art Nouveau movement. The park is well-known for the colonnaded hall, made with a peculiar stone to mimic the look of snakeskin. Visitors delight in the surprising features of Gaudi’s outdoor creation, such as a vibrant lizard known as “El Drac.”

The construction of La Sagrada Familia began in 1892 and isn’t expected to be complete until 2030. The architect’s sudden death halted construction of his most famous work, and several years of politics and indecision has left Gaudi’s magnum opus incomplete. Although undone, the church represents the relationship between man, nature, and God. If you’re traveling to Barcelona, it’s recommended to book your tour of La Sagrada Familia well in advance.

In 1984, La Pedrera was declared a World Heritage Site by UNESCO. The unusual residential building is structured around two courtyards that provide light to almost every room in the entire structure, including the basement. The roof is crowned with skylights, constructed out of brick, broken marble, and glass. Visitors have described La Pedrera as a “living art structure.”

While Gaudi’s work typically reflects his adoration of nature, the Casa Calvet is a prime example of the architect’s dynamic abilities. Built between 1898 and 1900 for the Calvet family, Casa Calvet is known as Gaudi’s most conventional work. The artist gathered inspiration from the Baroque period to complete the stone facade, as well as the distinct sculptural decoration.

AESU offers several trips to Spain, including: Euro Explorer and Continental. Explore Spain and its spectacular landscapes. Try a variety of authentic Spanish tapas and delicacies from all over the country!

Categories: Spain | Tags: aesu, barcelona, gaudi, and Visit Spain
This entry was posted on Wednesday, September 13th, 2017 at 9:10 am . You can follow any responses to this entry through the RSS 2.0 feed. Both comments and pings are currently closed.