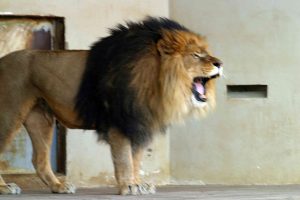 You won’t encounter real lions roaming the grounds of the Tower of London today, but you can experience the fascinating sculptures that have taken their place.

The Tower of London may be home to the crown jewels, but it also provides shelter to a magnificent and curious menagerie. The large, wire mesh animal sculptures that line the Tower’s grounds are replicas of the exotic wildlife that once roamed the historical landmark. If you’re planning a visit to Britain’s most interesting attraction, be on the lookout for baboons, lions, and an elephant!

As it was a common practice for Medieval Kings throughout Europe to gift each other exotic animals, the Tower of London soon became the site of the most popular animal collection. The Tower Menagerie began in 1204 with a few lions and a couple bears. As new Kings took the thrown and more gifts were given, the menagerie grew into an impressive zoological garden filled with rare animals from around the world.

Open to the Public

During the 16th century, the Tower Menagerie was open to the public and visitors would come from far and wide to see the fantastic display of exotic animals. A few of the animals earned reputations, such as the leopard known to steal women’s umbrellas. As attitudes towards animal abuse became more progressive, the popularity of the menagerie diminished. By 1831, most of the animals were transferred to the London Zoo and some were sold to P.T. Barnum, the famous circus master. In 1835, the London Menagerie was officially closed on the orders of the Duke of Wellington.

Kendra Haste, sculptor and member of the Society of Wildlife Artists, is the artist behind the Tower of London’s current menagerie. Using galvanized wire, she creates animal sculptures that depict the true nature of the subject. Haste believes that galvanized wire is the only material that allows her to add life to her work, giving her the opportunity to add contour and volume to each sculpture.

Categories: Travel Tips | Tags: Tower Menagerie, tower of london, and Visit London
This entry was posted on Wednesday, July 12th, 2017 at 10:49 am . You can follow any responses to this entry through the RSS 2.0 feed. Responses are currently closed, but you can trackback from your own site.