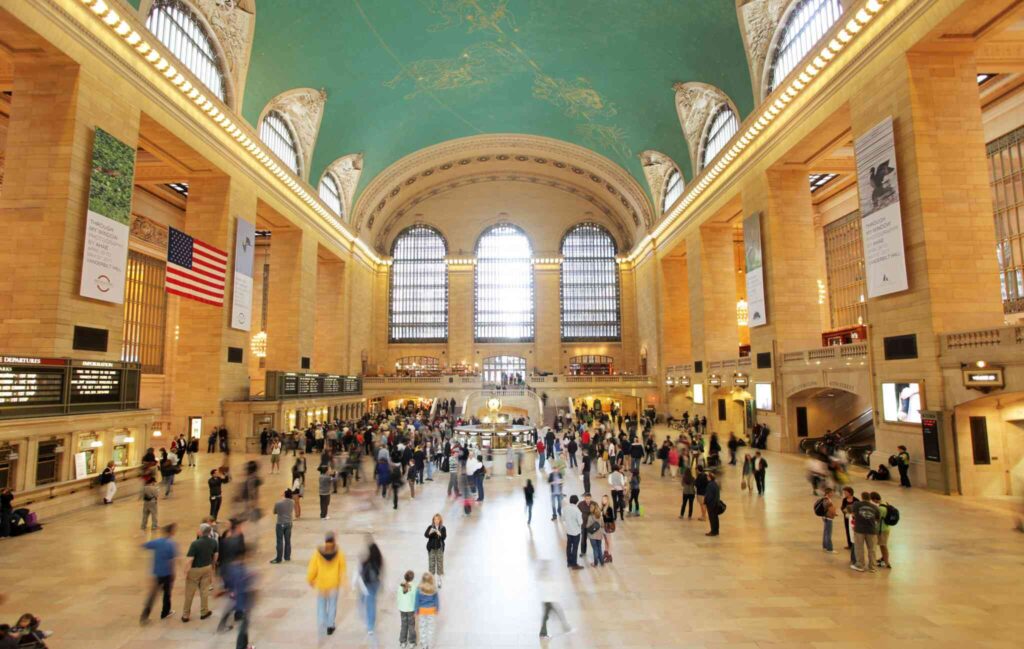 Many train stations around the world, such as Grand Central in New York, are iconic tourist attractions that can serve as a first impression for new arrivals!

Throughout much of the world, train travel is one of the most common ways to get from point A to point B. Trains were one of history’s first options for mass transit, and train stations were seen by urban planners as a great way to make a first impression with new arrivals. Municipalities put a lot of time, effort, and money into the architectural design of these buildings, such that many train stations have become icons of their respective cities. Even though a lot of travel these days is conducted between airports, train stations have a much greater following as symbols of internationalism, civic pride, egalitarianism, and more. Here are some of our favorite train stations from around the globe!

While some prefer the Beaux-Arts styling of Union Station in Washington DC, Grand Central Terminal is an iconic symbol of New York and the world’s largest train station. Featuring beautiful golden chandeliers and a magnificent mural on the ceiling, Grand Central looks just as great today as it did when it opened in 1913.

This station is notable for having been originally constructed in Glasgow, Scotland before being shipped and reassembled in Brazil. At the time of opening at the end of the 19th century, São Paulo was an important transit point for the export of coffee beans. While it was neglected as air shipping grew in importance, the city ordered its restoration in the 1990s and it has become one of the important transit points in the city!

Nearly every train station from Europe’s capital cities could have made this list – London’s St. Pancras, Paris’s Gare du Nord, Estacion de Madrid Atocha in Madrid, and more. However, a special shout-out should be reserved for Moscow’s Kazansky Station. Almost every train and subway station in Moscow features surprisingly ornate architecture – surprising in that many were constructed during the start of the Soviet era, which clashes with the expectation of Soviet realist design. Kazansky Station, the western terminus of the Trans-Siberian Railway, features several different styles from Art Nouveau to Rococo – not surprising, given that construction began during the reign of Tsar Nicholas II and completed when Stalin led the USSR!

The CMF Railway Station in Maputo is a relic of Mozambique’s time as a colony of Portugal, featuring an instantly recognizable white and mint green exterior with a dome. It is suggested that the legend Gustave Eiffel worked on this project – though whether he did or not is contested. Stepping inside the station is like taking a step back in time – with wooden benches, old-school ticket counters, and even antique trains on display, it’s worth stopping by even if you don’t plan on using the station to travel!

Despite the importance of train travel in modern Japanese life, most train stations in Japan tend to look very similar. Tokyo Station is different, although it isn’t quite as iconic as some of the other world capital stations. Kanazawa Station, in some respects, hews to this tradition of cookie-cutter design, although the exterior entrance is where it garners the most admiration. Featuring a hand-drum shaped gate that mimics the traditional torii gates at Shinto shrines, a steel Motenashi dome, and a fountain that can display time like a digital clock, Kanazawa Station fuses modern technology with traditional forms – and, in that way, it stands as the perfect representation of modern-day Japan.

Categories: Travel Tips | Tags: kanazawa, maputo, moscow, new york city, sao paulo, train station, and train travel
This entry was posted on Wednesday, May 26th, 2021 at 10:31 am . You can follow any responses to this entry through the RSS 2.0 feed. Both comments and pings are currently closed.