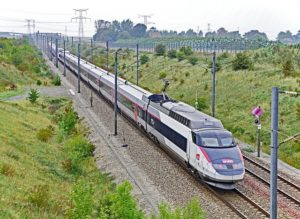 Eurostar trains carry passengers between England and France through the “Chunnel.” Travelers using this tunnel can cross the English Channel in a hurry, all without setting foot on a ferry!

The English Channel separates Great Britain from continental Europe and has been part of its natural defense against invasions throughout history. No force has invaded England since William the Conqueror in 1066, though many tried! However, this channel has also been a natural barrier against ordinary travel, business transactions, cross-cultural exchange, and more.

The idea of a tunnel built to connect mainland Europe with England was developed way back in 1802 and counted Napoleon Bonaparte among its supporters. Construction didn’t begin until after the development of heavy tunnel-boring machinery in 1988 – completed in 1993 with rail service starting in 1994, the “Chunnel”, as it is affectionately known, is now one of the most used tunnels in the world.

The Chunnel is 31.5 miles long, with 23.5 miles being underwater. This makes it the longest undersea tunnel in the world – definitely not one you should hold your breath under! At its deepest point, the tunnel is 246 feet below seal level. While we talk of “the Chunnel”, it actually consists of 3 separate tunnels. One runs north towards England, one runs south towards France, and the other is the service tunnel. All three link the English town of Folkestone in Kent to the French town of Coquelles in Pas-de-Calais.

England? France? Why not Both?

If you’re travelling to Paris or London, you owe it to yourself to take advantage of the Chunnel and see both cities. You could be dining in a bistro near the Eiffel Tower on Saturday, then exploring Piccadilly Circus on Sunday! Eurostar, one of the leading train companies in Europe, operates the shuttle that takes passengers between England and France. With train speeds at 100 mph within the tunnel and 186 mph outside of it, cross-channel traffic has never been more convenient or speedy!

Planning to Travel the Chunnel

If your European adventure is starting out in England, the Chunnel will be your key to the continent. Trains to Paris leave out of St. Pancras International station in Camden and it will take a little over two hours to arrive in the city of Light. From here, Paris can act as a hub for the rest of your travels on the continent. Eurostar service also connects Paris to Brussels and Amsterdam, although there are other options for access to places such as the Iberian Peninsula, Italy, Germany, and points further east.

Travelling to London from Paris? Gare du Nord station, accessible from lines 4 and 5 of the Paris Metro, is your port of call for Chunnel train access. From London, the rest of Great Britain is at your beck and call – visit Manchester, Liverpool, Glasgow, Cardiff, and much more!

Categories: Europe | Tags: Calais, English Channel, france, Great Britain, the Chunnel, and Travel Europe
This entry was posted on Wednesday, August 26th, 2020 at 11:00 am . You can follow any responses to this entry through the RSS 2.0 feed. Both comments and pings are currently closed.