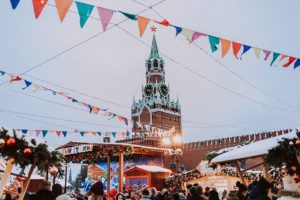 Explore the world with AESU, and experience winter holidays around the world!

Although the temperature is cold in many parts of the world during the winter, it can also be a time of some of the celebrations that bring the most treasured memories of a person’s life. Thanks to the diversity in the USA, we can share many different cultural traditions. Many of us are familiar with Christmas, Kwanzaa, and Hanukkah, which are three of the most popular winter holidays here, but outside of our country there are many holidays that we might not have heard of before. Explore the world with AESU, and experience winter holidays around the world!

There are several religious holidays celebrated in winter. Across Europe, St. Nicholas Day is celebrated with gift-giving, in honor of the charitable bishop from the early Christian church who became the inspiration for Santa Claus. In other areas of the world, Diwali is a five-day festival of lights to celebrate the legacies of Hindu religious leaders Mahavira and Swami Dayanand.

Many countries in Europe celebrate different variations on the Christmas tradition. An example of this is Three Kings Day, which is such a popular holiday in Spain that often Christmas presents are opened at that time instead. Also called Epiphany, Three Kings Day takes place in January, and it is a celebration of the three wise men who visited Jesus soon after his birth. In France, Three Kings Day is celebrated with a king cake, with prizes like coins hidden inside.

The shortest day of the year is the Winter Solstice, which usually lands on December 21st. This day has been celebrated through many different holidays around the world; such as St. Lucia’s day in Sweden where young girls dress in white and wear a crown of candles to represent St. Lucia, and the Chinese festival Dong Zhi, which celebrates the coming of winter with an end of the harvest feast.

Celebrating the New Year is a holiday with one of the most variations across the world. Whether that is by following a different calendar, like Rosh Hashanna on the Jewish calendar, or the lunar calendar for the Chinese New Year. In Japan, many families visit shrines or temples as part of Omisoka, or New Year’s Eve. The unifying theme of most New Year’s celebrations is rebirth and having a fresh start.