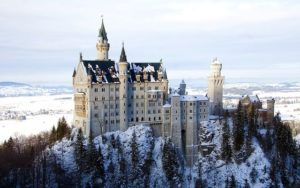 Neuschwanstein Castle is one of Europe’s most beautiful castles that is waiting to be explored!

One of the most exciting things about visiting Europe is having a first-hand experience of the rich history in each country. Today, you can still see the centuries of history across the landscape in the form of monuments and castles. There are hundreds if not thousands of castles across Europe with stories to tell, but a handful of them have risen to the top as some of the best. Here are some of Europe’s most beautiful castles that are waiting to be explored!

Neuschwanstein Castle was originally built for King Ludwig II. It was a private retreat for the very shy and reclusive ruler. Neuschwanstein was opened to the public about seven weeks after his death in 1886. Today, Neuschwanstein Castle is considered one of the most recognizable castles in the world because it was the inspiration for Disneyland’s Sleeping Beauty Castle. Around 1.4 million people visit the majestic castle yearly at its clifftop location in the Bavarian Alps.

The Eilean Donan Castle is easily the most famous castle in Scotland, as well as one of the most well-known castles in the entire United Kingdom. It is located in the Scottish highlands on a small island surrounded by Loch Long, Loch Dutch, and Loch Alsh. Eilean Donan originated as a medieval stronghold in the 13th century for the Mackenzie and Macrae clans. This castle was destroyed in the 17th century but rebuilt much later in the mid 1900s. Eilean Donan Castle has beautiful, mossy walls and a majestic stone bridge. It is easily one of the most photographed castles in Europe.

The Alcázar of Segovia stands out as one of the most visually unique castles in Europe. That is because of the shape of this cliffside castle; one end comes roughly into a point like the prow of a ship. This castle has taken many roles throughout its history. It was first constructed as a fortress, and it has since been used as a royal palace, state prison, a military academy and more. It is an exciting place for tourists to explore because it holds a museum, towers, and even secret passageways.

Categories: Europe | Tags: aesu, AESU Europe, AESU Travel, AESU World Travel, castle, europe, and Neuschwanstein Castle
This entry was posted on Wednesday, January 1st, 2020 at 8:58 am . You can follow any responses to this entry through the RSS 2.0 feed. Both comments and pings are currently closed.